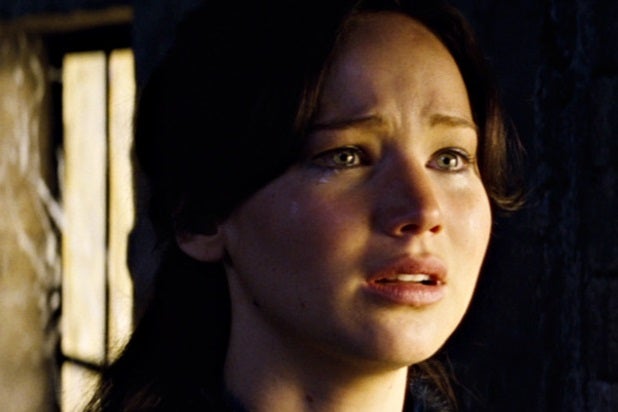 Jennifer Lawrence and “The Hunger Games Catching Fire” scored a box-office bulls-eye this weekend, roaring to $161 million in its U.S. opening.

The domestic haul is the biggest November debut ever, the fourth-best all-time and the year’s second-best, behind only Disney Marvel superhero sequel “Iron Man 3,” which soared to $174 million in May.

“Catching Fire” added another $146 million after opening No. 1 in nearly all 63 foreign markets in which it debuted, giving it a sizzling first weekend total of $307 million worldwide, way up from the $218 million global debut of the first film.

Records aside, it’s a huge financial win for Lionsgate. The massive debut for the sequel to last year’s “The Hunger Games,” which opened to $152 million in the U.S. in March 2012 and went on to take in nearly $700 million globally, means the studio has successfully replaced its “Twilight” franchise.

The next installments of the series based on author Suzanne Collins’ best-selling young-adult trilogy- “Mockingjay Part 1” and “Mockingjay Part 2” – are set for release in November of 2014 and 2015. The studio has launched a massive global merchandising campaign around around Katniss and Co., and has even talked “Hunger Games” theme parks.

“Catching Fire” blew away the competition, accounting for roughly 72 percent of the overall box-office total. The previous best November opening was the $142.9 million put by 2009’s “The Twilight Saga: New Moon.”

Disney’s Marvel superhero sequel “Thor : The Dark World,” the No. 1 movie worldwide with more than $500 million over the past three weeks, finished a distant second with $14 million. Universal’s comedy “The Best Man Holiday” was third in its second week with $12.5 million and the weekend’s only wide opener, the Vince Vaughn sperm donor comedy “Delivery Man,” disappointed with $8 million for DreamWorks and Disney.

Analysts had thought “Catching Fire” might challenge the record debut of “Iron Man 3,” based on pre-release tracking which suggested an opening north of $160 million. But while the sci-fi action sequel averaged more than $38,000 its market-high 4,136 theaters, none of those were 3D. That premium price boost that comes with the format benefited both “Iron Man 3” and “Marvel’s The Avengers,” which posted the biggest debut ever with $207 million in May 2012. The third biggest opening ever is “Harry Potter and the Deathly Hallows Part 2” with $169 million in July of 2011.

The decision by the filmmakers to forego 3D was artistic, with 2D deemed more appropriate for the look and feel of both the original film and the sequel. However, parts of “Catching Fire,” which had a $130 million production budget, were shot in Imax and it got a major boost from big screens. Fourteen percent of the U.S. grosses came from premium large format screens, led by Imax and Cinemark XD. Eight of the top ten theaters nationwide for “Catching Fire” were Imax, and it accounted for $12.6 million in grosses.

“Catching Fire” played more broadly than the original.  The opening night crowd was split evenly between those over 25 years of age and those under.  And the audience was 59 percent female, 12 percent less than for “The Hunger Games.”

“That tells us audiences loved it and were spreading the word, and that means we’re set up very well for Thanksgiving,” he said.

The strong follow-up to “Hunger Games” is no small achievement. Only 22 original movies have earned more than $350 million domestically and, according to Box Office Mojo, eight have had direct sequels — none of which had matched their predecessor’s grosses.

The audience gave it an “A” CinemaScore and the critics have liked it to. It has an 89 percent positive rating on Rotten Tomatoes, compared with the first film’s 84 percent.

The film was directed by Francis Lawrence (“I am Legend”), who took the reins from Gary Ross.  Simon Beaufoy and Michael deBruyn adapted the screenplay. Nina Jacobson and Jon Kilik produced.

Oscar contenders “Gravity,” “12 Years a Slave” and “Dallas Buyers Club” rounded out the top ten. Focus expanded the Matthew McConaughey-Jared Leto AIDS drama by 482 theaters and it took in $2.7 million from 666 locations.

Sony’s Tom Hanks piracy saga “Captain Phillips” fell off the list but its domestic total will passed the $100 million mark on Saturday.

Disney opened the animated family film “Frozen” in an exclusive engagement at the El Capitan Theater in Hollywood and it brought in a strong $237,000.