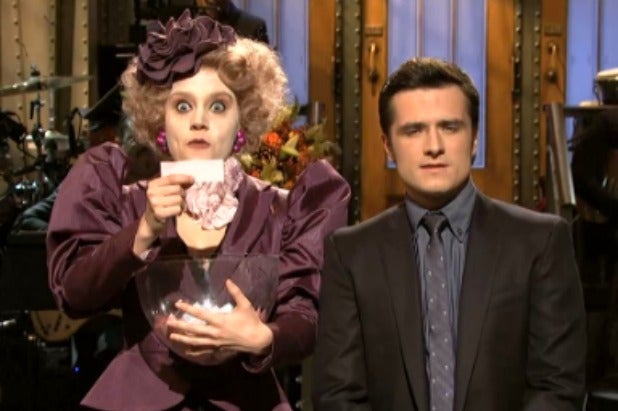 Josh Hutcherson hosted “Saturday Night Live” and accidentally presided over the show’s own “Hunger Games”: A brutal battle for stage time that got Bobby Moynihan shot through with an arrow.

One added benefit: Katniss Everdeen arrived to carry Hutcherson to the next sketch, just she carries his character, Peeta, through the Hunger Games.

Also read: Jennifer Lawrence Tells Jon Stewart CNN Haircut Alert Was ‘The Weirdest Thing That Has Ever Happened to Me’ (Video)

In the show’s pre-Thanksgiving episode, the “Catching Fire” star also brought his turkey girlfriend home for dinner, and went back to the 1980s to sing the Outfield’s “Your Life” to Vanessa Bayer — who also played the appalled turkey. The show opened with Kate McKinnon as George Zimmerman’s girlfriend, explaining their “trespassing” role play games to Piers Morgan (Taran Killam).

“Weekend Update”: The Worst Lady on an Airplane: