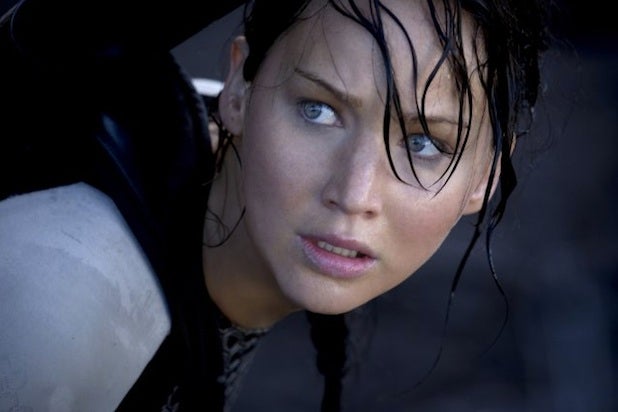 Jennifer Lawrence doesn’t return to the box office as Katniss Everdeen until next week, but critics who have seen “The Hunger Games: Catching Fire” are already raving that this expected blockbuster is bigger, better and smarter than its 2012 predecessor, “The Hunger Games.”

“At 146 minutes (which fly by), the movie has no dead spaces. Even this second go-round of the Hunger Games themselves feels excitingly different,” TheWrap’s Alonso Duralde wrote in a glowing review for the Nov. 22 Lionsgate release. “‘The Hunger Games: Catching Fire’ serves up food for thought and jolts of adrenaline in equal doses, which is more than most YA adaptations have managed to deliver.”

So far, the film — an adaptation of author Suzanne Collins’ novel of the same name — has accumulated a 92 percent “Fresh” rating on critic aggregator Rotten Tomatoes, with just one naysayer at the moment.

There are only 13 reviews currently available, however, so that positive percentage  has potential to drop dramatically. But the voices praising the effort from director Francis Lawrence (“I Am Legend”), as well as writers Simon Beaufoy (“Slumdog Millionaire”) and Michael Arndt (“Toy Story 3”), suggest many more will leave the theater feeling satisfied.

“‘The Hunger Games: Catching Fire’ is another strong installment in this confident series,” IGN’s Eric Goldman concluded. “Structurally, it’s hard not to notice the close similarity to the first film, but within that familiar framework, there are some very emotional moments, delivered by a wonderful cast.”

While Digital Spy and the UK’s Guardian gave the film positive reviews with caveats, including being “consistently underwhelming” and having a “lack” of heart, respectively,  Time Out critic Cath Clark commended “Catching Fire” for being better than the original.

“What are the odds? Like Katniss Everdeen ducking a poison-tip arrow, the keepers of Suzanne Collins’s trilogy of fantasy novels have dodged the perils of the sloppy second franchise film,” Clark wrote. “‘The Hunger Games: Catching Fire’ is leaner, gutsier and smarter. In hand-to-hand combat, it would have the first film on the floor, trapped in a headlock, whimpering for mercy.”

Like most, Screen Daily critic Tim Grierson found Lawrence’s second portrayal of battle-worn heroine Everdeen nothing short of rousing, but couldn’t say the same for the overall picture.

“‘Catching Fire’ remains glumly mediocre because it can’t shake its disappointing mirroring of the first film or its role as connective tissue between ‘The Hunger Games’ and subsequent sequels,” Grierson wrote. “Although Francis Lawrence films the Hunger Games sequences with decent amounts of dread and excitement, these scenes aren’t significantly more interesting than what was shown in last year’s installment.”