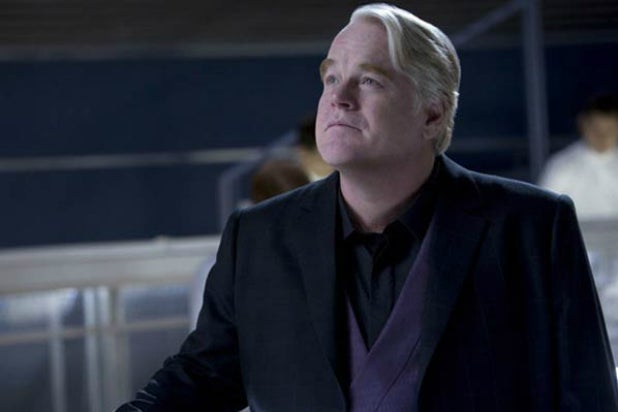 The voice of Philip Seymour Hoffman is the first sound you hear in the latest trailer for “The Hunger Games: Mockingjay Part 1,” the third installment in the popular movie franchise. Hoffman died before production on the movies concluded, but he plays a central role in the upcoming films.

Lionsgate will release the trailer to the world on Monday, but it is giving fans at Comic-Con a sneak peek at the video this weekend. After visiting the Capitol Gallery, a room larded with themed snacks, holograms, music and free totes, fans can climb upstairs to enter an all-white room.

No cameras are allowed inside, but everything is white — down to the yogurt-covered pretzels and saltwater taffy.

The video is one minute long, and sets the stage for the impending rebellion. A plane hovers, and then it cuts to Hoffman.

“No one else can do this but her,” Hoffman (Plutarch Heavensbee) declares to Julianne Moore.

“We need to unite these people.”

Moore (President Alma Coin) is dubious. Not after what Katniss Everdeen (Jennifer Lawrence) has been through. Is she up to the challenge? Will she lead the downtrodden and disaffected?