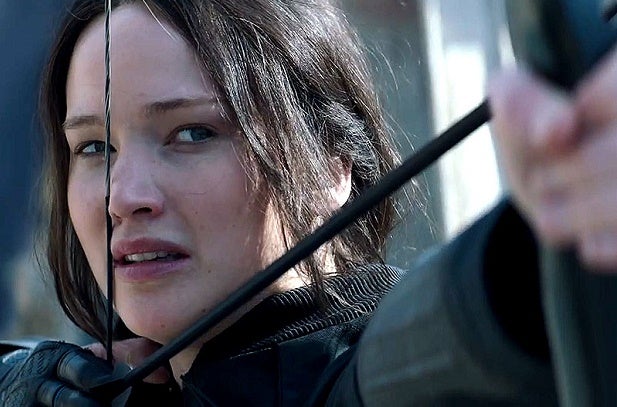 “The Hunger Games: Mockingjay – Part 1” roared into theaters with a $55 million first day at the box office Friday, and is on course to post the biggest opening weekend of 2014 with between $125 million and $130 million.

That’s would be well over the $100 million that “Transformers: Age of Extinction” debuted with in June, but at the low end of the expectations of distributor Lionsgate and analysts, who projected the third entry in the franchise finale starring Jennifer Lawrence would take in between $130 million and $150 million.

The first day for “Mockingjay” also was considerably below that of the two previous entries in the young adult series based on Suzanne Collins‘ best-selling sci-fi trilogy. “The Hunger Games: Catching Fire” posted a $70 million Friday on its way to a $158 million debut on this weekend last year. And “The Hunger Games” brought in $67 million on its first day, on the way to a $152.5 million opening in March of 2012.

Lionsgate is rolling out “Mockingjay,” directed by Francis Lawrence, in 85 foreign markets this weekend as well, and it has brought in an estimated $67 million already with No. 1 openings in virtually every market.

“Mockingjay” was in a saturation-level 4,151 theaters domestically, though it’s not shot in 3D and isn’t showing in IMAX theaters, and thus won’t get the boost in grosses from those ticket upcharges. The giant screen company opted to stick with Christopher Nolan’s space epic “Interstellar” in its third week instead.

Audiences gave “Mockingjay” an “A-” CinemaScore; just below the “A” grades that both “The Hunger Games” and “Catching Fire” received from first-night moviegoers. But the critics liked the first two films better. “Mockingjay” is at 68 percent positive on Rotten Tomatoes, while “The Hunger Games” had an 84 percent rating on Rotten Tomatoes and “Catching Fire” was at 89.

Lionsgate split the final book in the trilogy into two films, and they were shot back-to-back at a reported cost of $250 million. “Mockingjay — Part 2” is set to open on Nov. 20, 2015.

Disney Animation’s “Big Hero 6” was a distant second Friday with $4.4 million, and is looking at a roughly $19 million third week that would lift its domestic total to nearly $135 million.

“Interstellar” took in $4.2 million Friday and is headed for a three-day total north of $14 million that would give it a $120 million domestic total for Paramount.

Last weekend’s No. 1 movie, the Jim Carrey-Jeff Daniels comedy sequel “Dumb and Dumber To,” was third Friday with $4.4 million – a steep 70 percent drop from last week – and is on pace to come in just under $14 million for Universal Pictures.

With “Mockingjay” running behind the pace of “Catching Fire,” the overall box office was roughly 10 down from last year.