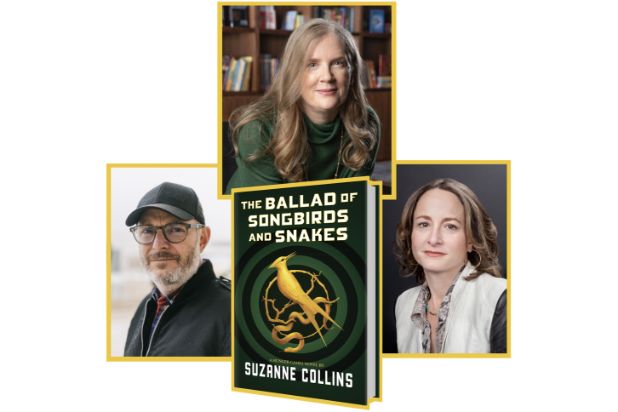 The movie adaptation of the upcoming “The Hunger Games” prequel book “The Ballad of Songbirds and Snakes” from author Suzanne Collins is a go at Lionsgate, and the creative team from the original films, including director Francis Lawrence, is all returning for the new film, Lionsgate motion picture group chairman Joe Drake announced Tuesday.

Lawrence, who directed “Catching Fire” and both “Mockingjay” films, will direct “The Hunger Games” prequel. Collins will write a treatment based on her upcoming novel, Color Force’s Nina Jacobson is returning to the franchise to produce, and Michael Arndt, who wrote “Catching Fire,” will pen the screenplay.

“The Ballad of Songbirds and Snakes” takes place 64 years before the original trilogy, during the 10th annual Hunger Games, and will focus on Coriolanus Snow (played by Donald Sutherland in the original franchise) at age 18, years before he would become the tyrannical president of Panem.

Young Coriolanus is handsome and charming, and though the Snow family has fallen on hard times, he sees a chance for a change in his fortunes when he is chosen to be a mentor for the 10th Hunger Games, only to have his elation dashed when he is assigned to mentor the girl tribute from impoverished District 12.

Scholastic will publish “The Ballad of Songbirds and Snakes” on May 19 in print, digital and audio formats in the U.S., Canada, the UK and Ireland, Australia and New Zealand.

“Suzanne’s new book has been worth the wait. It offers everything fans could hope for and expect from ‘The Hunger Games’ while also breaking new ground and introducing an entirely new canvas of characters. ‘The Ballad of Songbirds and Snakes’ is creatively thrilling and takes this world to complex new dimensions that open up amazing cinematic possibilities. We’re thrilled to reunite this filmmaking team with this very unique franchise, and we can’t wait to begin production,” Drake said in a statement.

“Lionsgate has always been the cinematic home of ‘The Hunger Games,’ and I’m delighted to be returning to them with this new book,” Collins said in a statement. “From the beginning, they have treated the source material with great respect, honoring the thematic and narrative elements of the story, and assembling an incredible team both in front of and behind the camera. It’s such a pleasure to be reuniting with Nina, Francis, and Michael to adapt the novel to the screen, and having them share their remarkable talents, once again, with the world of Panem. I look forward to collaborating with them and all at Lionsgate as we bring ‘The Ballad of Songbirds and Snakes’ to theaters worldwide.”

Jacobson, who has produced all the films in the franchise, will produce “The Ballad of Songbirds and Snakes” along with her partner Brad Simpson, who will also be involved in a producorial capacity. Collins will also serve as an executive producer.

The four “Hunger Games” films have grossed $2.9 billion at the worldwide box office. Lionsgate has also licensed the film for theme parks and live concert tours. And the books themselves have sold more than 100 million copies in print worldwide and have been translated into 52 languages.

The deal was overseen by Drake, who bought the original book during his previous tenure at the studio as head of the motion picture group. With the release of the new book, Drake made “The Ballad of Songbirds and Snakes” a priority for Lionsgate. Jim Miller, the Lionsgate executive who has served as the studio’s project executive on all of the franchise’s films, will oversee the production. Patricia Laucella and Phil Strina oversaw the rights for the book as well as all talent deals for Lionsgate.

Lawrence most recently served as an executive producer on the Apple TV+ series “See” and directed the first three episodes of the series. Prior to that he reunited with “Hunger Games” star Jennifer Lawrence on the spy thriller “Red Sparrow.”

Collins was represented by Jason Dravis from The Dravis Agency and Diane Golden and Jennifer Justman from the law firm Katz Golden Lerner LLP. Lawrence is represented by CAA and 3 Arts as well as Gretchen Bruggeman-Rush at Hansen, Jacobson, Teller & Hoberman. Jacobson was represented by Julian Zajfen at Ziffren Brittenham. Arndt is repped by Verve and McKuin, Frankel & Whitehead.