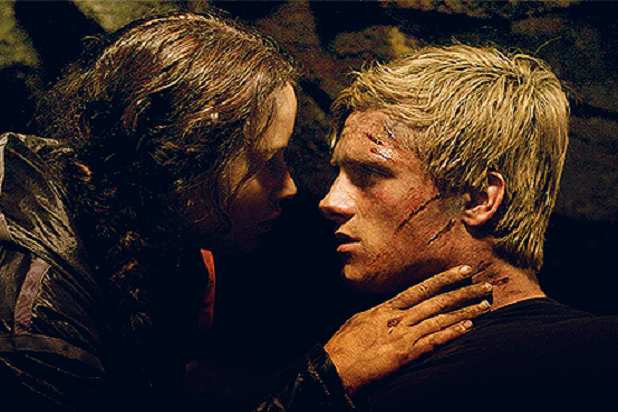 Probably only in some dark, dank corner of internet fan fiction. But Josh Hutcherson — who plays Mellark in the “Hunger Games” film franchise — could see himself cozying up with Jennifer Lawrence‘s Everdeen and Liam Hemsworth‘s Hawthorne.

“I know Peeta would be into it, for sure. He’s very sensitive, in touch with his emotions,” Hutcherson says in Out magazine’s November issue, which features the actor on its cover.

“I think it really might solve a lot of their problems. You know what? I’m going to pitch that idea. Let’s make it a – what’s it called when three people are in a relationship together? A triad? That’ll go over well with Middle America.”

In his interview, Hutcherson identifies himself as straight — but hints that there could be some wiggle room in his sexuality if he met the right guy.

“Maybe I could say right now I’m 100 percent straight. But who knows?” Hutcherson offers.  “In a fucking year, I could meet a guy and be like, ‘Whoa, I’m attracted to this person.’ I’ve met guys all the time that I’m like, ‘Damn, that’s a good-looking guy, you know? I’ve never been, like, ‘Oh, I want to kiss that guy.’ I really love women. But I think defining yourself as 100% anything is kind of near-sighted and close-minded.”

Also on the topic of avoiding close-mindedness, Hutcherson also talks about his work with charity organization Straight But Not Narrow, which works to prevent youth bullying. (Hutcherson serves as a celebrity advocate for the organization.)

“Talking to kids in school and reaching out through social media, we found to be really effective. That’s where the bullying happens the most, where people are molded into who they become when they grow up,” Hutcherson said.

“Kids are so mean to each other sometimes. You’re figuring out who you are, and you’re insecure about it. Especially if you don’t have a great family life or you’re being influenced by a religion too much, a way to feel better sometimes is to put somebody else down. Our goal is making kids more compassionate and more understanding that people are just people. It’s really about being yourself.”

The November issue of “Out” is on sale Oct. 22. In the meantime, read Hutcherson’s full cover story here.