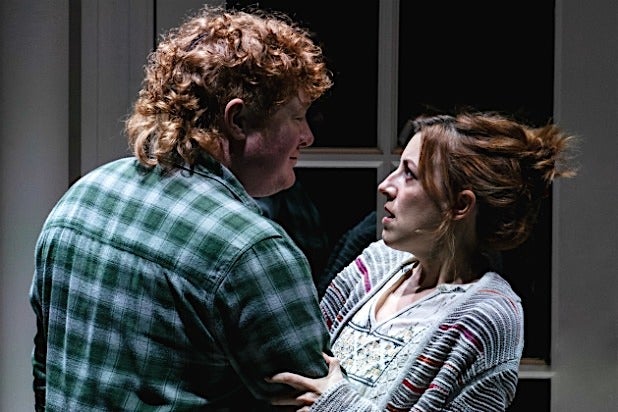 Madeleine George clearly knows the housewives of New Jersey better than she does Greek gods. Her new play, “Hurricane Diane,” opened Thursday at the New York Theatre Workshop (in a joint production with the WP Theater), and the comedy begins inauspiciously with a long monologue from Dionysus (Becca Blackwell), who feels the need to reintroduce himself to a no longer adoring public. He’s one god who isn’t talked about much anymore. He used to be famous. In Rome, they affectionately nicknamed him Bacchus, and women threw themselves at him. But that was millennia ago, and now he’s not only ready for a big comeback, but he’s a female, insists on being called Diane, and lives “outside of Burlington, Vermont — I had my own landscaping business up there with a focus on sustainability and small-scale permaculture.”

“Hurricane Diane” improves mightily the second the lesbian goddess Diane shares the stage with a gaggle of housewives who live on a cul-de-sac in Monmouth County, New Jersey. These four “girls” (they call themselves “girls”) want to hire Diane to landscape, and each of them has a very definite idea of what should be done with her respective yard. Diane, for her part, will have none of the accent benches or flowering vines that match the color of the plastic shutters. She’s into sustainability and “permaculture,” and more important, she wants to screw all four wives, just like Dionysus used to do back in the good old days.

After their monologue, Blackwell holds their own with the girls. Blackwell prefers the pronoun “their,” and this trans performer gradually emerges in “Hurricane Diane” as a strong, sexy, silent type in the play’s many seductions and makeout sessions.

The girls, on the other hand, are anything but quiet. When they’re all together on stage brainstorming on things pretty and mundane, “Hurricane Diane” turns into the very best moments from a “Real Housewives of New Jersey” reunion. As the Italian-American Pam, Danielle Skraastad gives a spot-on impersonation of real-life jailbird Teresa Giudice, only more deafening and defiant. Like a master stand-up comic, Pam demands that her backyard resemble the mural at a favorite Italian restaurant, complete with fountains, statues and terraces. Also hilarious are the somewhat more restrained riffs on leafy outdoor décor from her three neighbors: the persnickety Carol (Mia Barron), the pseudo-intellectual Renee (Michelle Beck) and the whimsical Beth (Kate Wetherhead), who wants a garden lovely enough to attract fairies.

Leigh Silverman’s direction makes sure that George’s biggest laughs come from the sprite one-liners, as well as the many things the housewives don’t tell each other to avoid hurt feelings. The subtext is often sublime and comes through loud and clear.

In other words, “Hurricane Diane” is an inside hit job in the vein of Clare Boothe Luce’s “The Women” and Mary McCarthy’s “The Group.” It’s a post-feminist play by a female playwright giving us a very unflattering portrait of women. The husbands never appear, but no matter. They sound like they deserve being married to these women.

George’s satire on suburban living offers only two choices. Everybody can embrace Diane or ruin the planet with our eco-unfriendly dreams. It’s clear that we’re all doomed. But what a way to go!