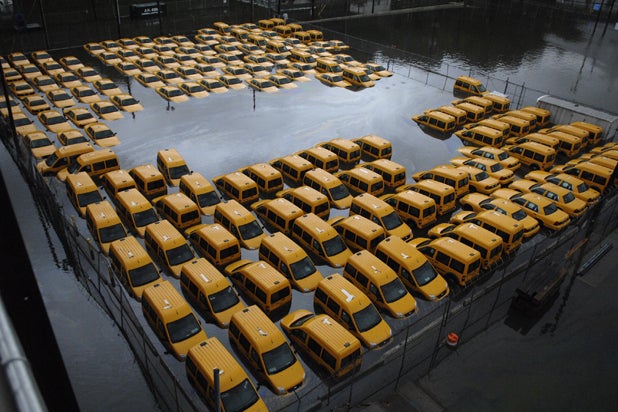 By the time Hurricane Sandy hit New York City on Oct. 29, 2012, it had been downgraded to a “superstorm,” but that didn’t stop it from causing significant damage to the most populous city in America, the effects of which the city and the surrounding areas still feel today.

An estimated 286 people were killed and about $68 billion of damage was caused by Sandy as it tore through the Caribbean and up America’s east coast. Here’s how the networks are looking back:

Also read: Syria Crisis: How the Networks Are Covering

ABC will be reporting from some of the storm’s hardest-hit areas, such as Breezy Point and the New Jersey coast. David Muir is also checking in on some of the babies who were evacuated from NYU’s Langone Medical Center, and talking to the doctors and nurses who delivered them in the dark. On “Good Morning America,” George Stephanopoulos spoke with NJ governor Chris Christie.

NBC began its coverage on Sunday’s “Meet the Press,” when Brian Williams appeared to talk about the storm’s impact. Williams will also anchor Tuesday’s “NBC Nightly News” from Breezy Point. Lester Holt will trace Sandy’s path and look at how those areas have recovered a year later, while Ann Curry heads to Staten Island. On “Today,” Al Roker broadcast live from the Jersey Shore and Matt Lauer checked in on the Rockaways.

Fox News‘ Rick Leventhal covered the reopening of Ellis Island on Monday. On Tuesday, he’ll travel along the Jersey Shore to check in on some of the hardest-hit areas.

CBS is covering the anniversary during its regularly scheduled news broadcasts, as is MSNBC.