Only at the Gotham Awards could the proverbial underdog become a superstar.

That’s exactly what happened during the ceremony at Cipriani on Wall Street last night, where "The Hurt Locker" — a movie nearly left for dead by Summit Entertainment until its late summer success and sudden accumulation of award season buzz — thoroughly cleaned up shop. 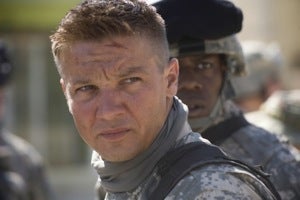 The Gothams, an annual celebration of independent film hosted by IFP, has occasionally suffered from its lack of consistency (in 2006, the juries nominated "The Departed" and "Babel" in multiple categories). The triumph of "Hurt Locker" offers a slightly more accurate depiction of the independent film world as a realm distinct from Hollywood product.

Alongside "A Serious Man," it was the biggest production honored at the ceremony. Though it cost $11 million to make, mere peanuts by studio standards, the film looked like a blockbuster compared to the tiny indies nominated in some of the same categories.

These included "Big Fan," the low-key character study with Patton Oswalt as an obsessed New York Giants nut, and the Chilean drama "The Maid." Both movies premiered at Sundance in January and rode the festival circuit to great acclaim, but neither has the same potential for box office success in limited release allotted to "Hurt Locker."

If nothing else, then, the 2009 Gothams offered an enticing alternative view of the year in cinema where consensus matters more than dollars and cents. According to IFP executive director Michelle Byrd, whose 16th year with the organization will be her last, the nominees reflected the state of the indie marketplace.

"It hasn’t been arbitrary," she told The Wrap shortly before receiving a standing ovation as she kicked off the ceremony. "We’ve really defined it by distribution. It’s too complicated to follow the path of financing."

These days, with indie distributors taking cautious steps through a fragile economic landscape, that distinction has a significant impact on the Gotham’s portrait of the current film scene. "I think you’re going to see less gray area in that whole issue of ‘smaller’ and ‘bigger’ films," Byrd said.

Compared to Oscar glamour, the Gothams did seem to exist in an alternative universe. Host Kumail Nanjiani’s best jokes of the night revolved around "Antichrist." Patricia Clarkson, presenting the award to Ry Russo Young’s "You Won’t Miss Me" for Best Film Not Coming to a Theater Near You, took a snide jab the category’s title: "That might be every good film ever made."

Even Stanley Tucci, accepting a career tribute from Meryl Streep, struck a vaguely desperate tone. "You need a lot of money to make a movie," he said in his acceptance speech. "But things will get better. The fact that indie movies are still being made is crucial."

Nevertheless, the studios weren’t entirely invisible from the proceedings. Working Title Films producer Eric Fellner, accepting another tribute award with colleague Tim Bevan for their esteemed work on modern classics like "Four Weddings and a Funeral," acknowledged larger forces involved in their successes. "I’m standing here at the independent film awards and about to thank Universal," he said, noting the company’s role in their productions.

Regardless of his big-league colleagues, Fellner couldn’t deny that Working Title has never been in the business of making big bucks, thanks to a savvy introduction to his speech delivered in hilarious deadpan by Joel and Ethan Coen. The brothers recounted their various experiences pitching barely profitable projects such as "O Brother, Where Art Thou" to Fellner and Bevan, repeatedly adding, "And the rest is box office history." The room cracked up each time. It was the ironic mantra of the night.

Best Film Not Playing at a Theater Near You Award presented by actors Patricia Clarkson and Sam Rockwell.
YOU WONT MISS ME
Ry Russo-Young, director, producer and co-writer

The recipient of The Best Film Not Playing at a Theater Near You award was determined by the editors of Filmmaker magazine, a publication of IFP, and a curator from the Museum of Modern Art.