The Los Angeles Film Critics Association has given its top prize to “The Hurt Locker,” selecting the Kathryn Bigelow film as the organization’s best picture of 2009.

The choice, coming on the heels of a victory at the hands of the Boston Society of Film Critics, gives the Iraq-themed film a boost in the Oscar race. Previously, Jason Reitman’s “Up in the Air” had won the top honors from the National Board of Review and Washington D.C. Film Critics.  "Up in the Air" was selected as runner-up in the LAFCA voting. 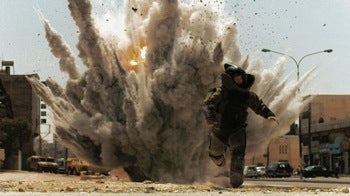 In one of the out-of-the-blue selections that often pop up in LAFCA voting,  Belgian-born actress Yolande Moreau was named best actress for “Seraphine” over Oscar frontrunner Carey Mulligan for "An Education."

Wes Anderson’s "Fantastic Mr. Fox" scored an upset victory over Pixar’s "Up" in the animated-film category.

The French film "Summer Hours" was named best foreign film, with "the White Ribbon" a runner-up.

In results announced earlier in the day, Christoph Waltz and Mo’Nique were honored as best supporting actor and actress for their roles in  "Inglourious Basterds" and "Precious," respectively.

Runner-up: Anna Kendrick, "Up in the Air"

Runner-up: Peter Capaldi, "In the Loop "

SCREENPLAY: Jason Reitman and Sheldon Turner, “Up in the Air"

DOCUMENTARY / NON-FICTION FILM: "The Beaches of Agnès" and "The Cove" (tie)