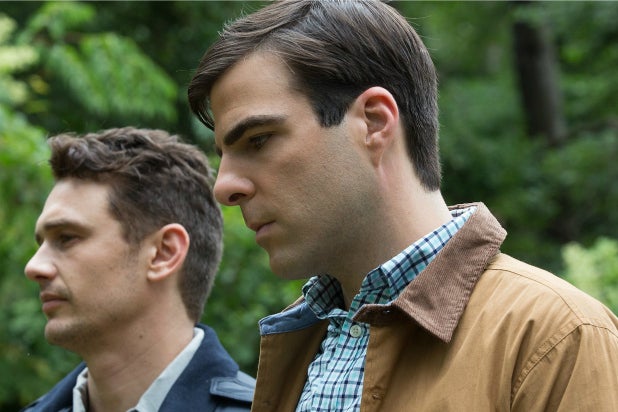 The first two minutes of Justin Kelly’s “I Am Michael” boil down the film’s ideological tension to one brief conversation. The titular character, an aspiring pastor, is counseling a distraught young gay man who’s unable to reconcile his religious beliefs with his sexuality. “‘Gay’ doesn’t exist,” the counselor says. “It’s a false identity.” The kid responds, “This isn’t my choice. Why would I choose this?”

And then comes the gut-punch line: “If you’re a moral person, then you’ll choose heterosexuality in order to be with God.”

The film then bounces back 10 years, showing Michael (James Franco) as a young, blond, and (wait for it) gay magazine writer and activist living in San Francisco. He’s in love with Bennett (Zachary Quinto) and has become a voice for his peers. Matthew Shepard had just been killed, shaking up the LGBT community. “F–king Christian fundamentalists should burn in hell,” he tells Bennett, who responds, “Uh, OK.” Michael may be the one who preaches, so to speak, acceptance, but clearly Bennett is the one with a live-and-let-live mindset.

See Video: James Franco Talks Getting Into Character for 'I Am Michael,' '90s Fashion and Best Picture Oscar Winner

Michael was raised Christian, and after the couple take on a third boyfriend, Tyler (Charlie Carver, “The Leftovers”), the trio decide to make a documentary about homosexuality and faith, traveling the country to interview others who are struggling. At one point, Michael steps into a church, but he quickly leaves. When they get back to San Francisco, however, Michael has a health scare that rattles him. He prays. And says, “Thank you, God” aloud to no one after he discovers he’s in the clear. What he had been experiencing were only panic attacks — but what was he panicked about?

The rest of “I Am Michael” shows him becoming an increasingly prominent public speaker and blogger, writing things such as, “The only truth is love. The only sin is denying love.” Yet while he’s continuing to live in the manner that he feels is true to himself, he also picks up a Bible. He starts a magazine for gay youth and puts out a “God Issue.” And he rather quickly starts moving away from the LGBT community and dabbling in organized religion, blindsiding Bennett and Tyler.

Franco’s fantastic here. He gives a fieriness to Michael as a gay advocate, then seamlessly slides into borderline madness as he starts accepting that the “voice” he hears is God’s. Michael’s confusion is palpable and intense, and Bennett loses patience as his partner increasingly drops the “G” word.

Quinto also gives a fine performance, slowly becoming a raw nerve as he watches Michael slip away from him and seeing pamphlets that say things such as “Turn or burn” lying around their apartment.

Though Kelly’s “King Cobra” was released last year, “I Am Michael” is his first film. (It premiered at the 2015 Sundance Film Festival.) He adapted the script from an article about the real Michael Glatze (by Benoit Denizet-Lewis) and seems to try to present the story without bias; however, it’s evident that Michael’s confusion is destroying him, and the gay community incinerates their former advocate. Even so, he starts making about-face statements such as, “I was a heterosexual person with a homosexual problem.”

At this point, it becomes obvious that Michael may not have always had the best intentions while he was a gay activist; he just wants others in the LGBT community to do as he does, to Be Like Mike, which now means that everyone who isn’t hetero must deny their sexuality and see the light. When he finally opens a church and ironically names it “Shepherd of the Plains,” you’re still unsure whether he truly believes in what he’s doing.

But because “I Am Michael” has shown other alternatives — some who are gay and renounce the church, others who are gay and have made peace with religion — this ambiguity feels, as the former Michael might say, like the truth.