And James Cameron shouldn’t have won the Globe for Best Director. 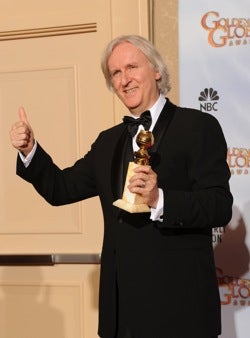 Now, I don’t bring this up because those are my opinions.

(Which they are, but for the moment, that’s beside the point.)

Rather, those are the words of Bullock and Cameron themselves, both of whom played what I’m calling the “‘I Don’t Deserve This’ Card” when they took home recent awards.

At Saturday night’s DGA Awards, will somebody take the stage and point out that they’re an undeserving winner? Don’t bet against it.

And what if it dawns on Academy members sitting in the audience, or watching at home on TV, that these solicitous speeches are right?

“I’m actually not well prepared. Very frankly, I thought Kathryn [Bigelow] was gonna get this … and she richly deserves it.”

And here’s Bullock in the SAG pressroom after her victory Saturday night:

“It was a fluke. I feel it’s wrong, if you really want to know the truth.”

Then she launched into a detailed, passionate description of a moment in “Julie & Julia” that demonstrated, she said, just how much better Meryl Streep is. 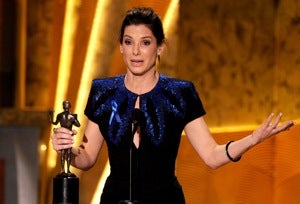 It’s a time-honored tactic, the IDDTC; perhaps it’s not as common or as safe as paying tribute to all your fellow nominees and insisting that filmmaking isn’t really a contest, but it’s an approach that has been trotted out regularly over the years.

When Juliette Binoche scored a big upset victory over Lauren Bacall in the Oscar Supporting Actress category in 1997, for instance, the stunned winner began her speech by saying, “I thought Lauren was going to get it. And I think she deserves it.”

Gwyneth Paltrow said she wasn’t worthy of her Best Actress for “Shakespeare in Love” two years later, though she didn’t single out who was. And Roberto Benigni, who was named Best Actor that same night for “Life is Beautiful,” said, “I don’t deserve this, but I hope to win some other Oscars.” 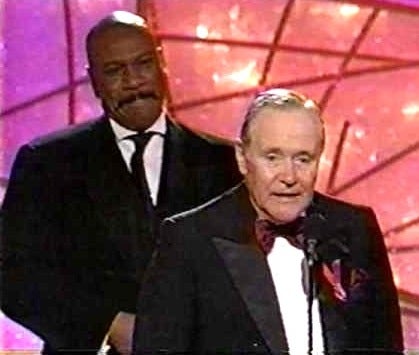 Of course, Ving Rhames is the king of the tactic, and the only one who actually had the cojones to back up his words with action: When he won the Golden Globe for TV Actor in a Miniseries 1998, he called fellow nominee Jack Lemmon onstage and forced Lemmon to take the award.

Now, I think we can all be reasonably certain that if Bullock and Cameron do win Oscars, Streep and Bigelow will not be going home with the hardware.

So what’s the point of playing the “‘I Don’t Deserve This’ Card?” Is it a pose, a way to make yourself look humble – which, let’s face it, is something that Cameron could always use?

In this case, I’m not so sure. Certainly, Bullock doesn’t have a reputation for arrogance that she needs to counter: she’s relentlessly likeable, everybody thinks she’s a sweetheart (hey, that’s one of the reasons she’s winning), and she appears to be down-to-earth and un-Hollywood enough to be saying it simply because she believes it’s true.

Or maybe she really is a better actress than Meryl Streep, and creating the nice-girl Sandy persona is her greatest performance.

As for Cameron, I get the feeling that no matter how much the media would like a nasty battle between ex-spouses, he and Bigelow really do wish each other well. Does he truly think she deserves it instead of him? I’ll reserve judgment on that one.

The trickiest part of playing the IDDTC in the run-up to the Oscars, though, is that you run the risk of voters actually listening to you.

What if, in fact, Oscar voters realize that Kathryn Bigelow does deserve to win Best Director over her ex? That yes, Meryl Streep was better in “Julia & Julia” than Bullock in “The Blind Side.”

(So were Carey Mulligan in “An Education” and Gabby Sidibe in “Precious” and Helen Mirren in “The Last Station” and Abbie Cornish in “Bright Star” … but what’s the sense of piling on?)

It’s a dangerous ploy, the IDDTC. It can backfire.

So maybe it’s better to listen to Clint Eastwood – who, in “The Unforgiven” (for which he won a couple of Oscars), dispensed some wisdom that was entirely unrelated to awards shows, but which applies anyway:

“Deserve’s got nothing to do with it.”

Do you hear that, Mr. Cameron? Are you listening, Ms. Bullock?

Or, perhaps, you could heed the words that Jack Benny once uttered when he was presented with an honor.