This story first appeared in the Oscars Nominations Preview issue of the TheWrap Oscar Magazine.

Jérémy Clapin’s animated film “I Lost My Body” tells the peculiar story of a severed hand that has a mind of its own and tries to find its way back to its former human host.

But Clapin’s film is really about loss, destiny and seeing the world through another perspective, and the last thing he wanted to do was make the image of this hand into something so scary or so quirky that it would detract from the drama of the story.

“The subject is a severed hand, but the film is not about a severed hand,” he said. “It’s about the hand missing the rest of the body. It brings a new perception of reality of how you explore character, how you can tell stories and how you see the world and experience the world in a different way. When you get involved on this kind of story, you don’t want to make ‘Addams Family.’ You want to make something new.”

The film frequently cuts back and forth between the severed hand’s wordless journey and the tragic backstory of the film’s human protagonist, all leading to how he ultimately comes to lose that hand in the first place. Clapin said his biggest challenge was to edit together those two separate perspectives to make it believable and realistic despite the impossible premise. He created this map of the character’s journeys to help plot the progress: 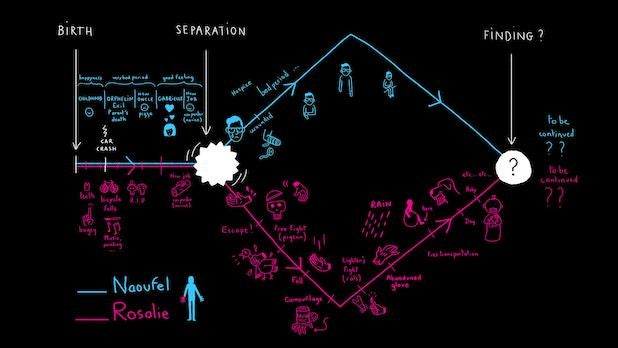 Clapin added that because the story is about a hand, he wanted something “handmade.” So to strike the right tone between this fantastical, surreal scenario and the more tragic, human parts of the story, he actually recruited live actors who embodied the characters and recorded their lines together on a studio set rather than in an audio booth.

Frames were then animated in a computer, with another animator putting hand-drawn 2-D animation over the CG.

“We had an artist drawing upon the CG, bringing life, bringing expression, bringing organic stuff and making the film more human than a computer can,” Clapin said. “And because the body is involved, you don’t project the same way, and it brings some fragility, something much closer to live action.”

“I Lost My Body” hand sketches

Decade in Review: ”Frozen“ and ”Coco“ rank among the highlights of the decade