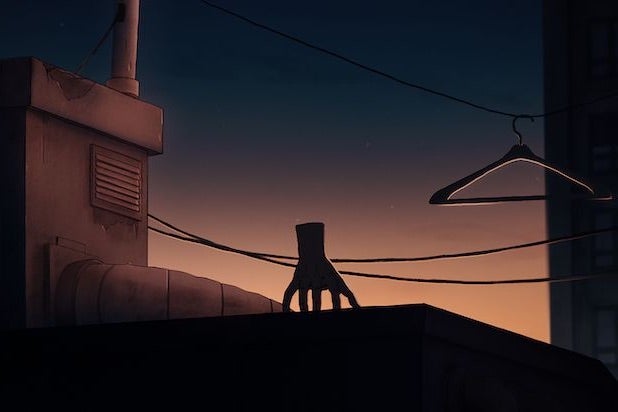 A hand-drawn hand stars in French director Jérémy Clapin’s engrossingly lyrical debut, “I Lost My Body,” a life-affirming work of graphic poetry that stands as the sole animated selection at Cannes’ Critics’ Week, where it world-premiered on Friday. Inventively adapted from Guillaume Laurant’s 2006 novel, “Happy Hand,” this bona fide treasure is sure to leave its melancholic fingerprints all over the viewer’s soul.

The film’s title refers to what its protagonist, a severed right hand, would note as its current predicament. Separated from the body of Naoufel (Hakim Faris), an orphaned young man who feels adrift, the sentient extremity escapes the lab where it has been kept since a grim accident caused the detachment.

Suffering from what’s best explained as reverse phantom limb syndrome, the hand aches to reunite with its rightful owner. Clapin, working from a place of utmost earnestness, depicts its voyage through Paris, an urban maze riddled with perilous adversaries and traps, as the most paramount of missions. Humor is present in the trials the hand undergoes, but the charmingly bizarre narrative shouldn’t be taken as parody.

Through subtle mannerisms, like how the hand “sits” with its fingers hanging over a building’s ledge, Clapin enlivens the heroic appendage with its own resonant personality. Black-and-white flashbacks exhibit its own tactile memories of the surfaces it’s touched, the objects it’s held, the music it’s played, and how it’s helped Naoufel contact and interact with the tangible world. It’s remarkably illustrative character development.

In spite of the disconnected tissue, there’s an inextricable bond between the two entities that make up part of the same whole. Thus, “I Lost My Body” intercuts the hand’s electrifying journey fencing off rats and insects with Naoufel’s humdrum existence and pessimistic outlook.

Conceptually, the film’s chief preoccupation is fate – more precisely, the extent to which an individual can exert free will to alter whatever hand he’s been dealt by the capricious universe. If all the sorrow in our lives is predetermined, can we hold onto a certain unbreakable happiness through it all? Or must we set in motion an active plan to defy providence, even if futile?

Also Read: Cannes Attendees, Listen Up: Here's How You Can Watch the 'Game of Thrones' Series Finale in France

As a child, Naoufel had recorded sounds to cherish as audio memories. Brimming with curiosity, his future had boundless promise. But lacking compassionate guidance from a tender age, Naoufel is now a pizza delivery boy who lives constantly regretting not being a step ahead of whatever it is he wants to attain.

His hand knows it, and in turn, it’s also haunted by the symbols of what it could have been. Closure, however, can’t be grabbed until Naoufel reckons with the tragedy beyond pity, and reframes it as an outside factor that bears to power over his desire to experience life in all its brokenness. Beaten and flawed, he is nonetheless complete.

As crushing as it is stirring, the gritty fable co-written for the screen by Clapin and Laurant (“Amélie,” “A Very Long Engagement”) finds an ideal visual medium in the filmmaker’s evocative animation.

Stylistically, “I Lost My Body” resides somewhere between a graphic novel and Japanese anime, with colors that appeared washed either by moonlight or the soft light of a mid-afternoon sun. It blends classically laborious techniques with digital production using open-source CG software: a case of technology in the service of heartfelt art.

Along with a Foley-heavy soundscape that lends authenticity to the hand’s adventure, the entire film is enveloped in a musical blanket knitted from the astral notes of Dan Levy’s atmospheric score. His electronic harmonies encapsulate what one imagines floating in the immensity of the universe might sound like. It’s grand in an outer-space scope, but emotionally rousing, so much that when paired with pivotal sequences it could prompt tears.

Breaking with the source text, Clapin introduces original imagery to further visualize Naoufel’s internal conflicts: a serendipitous flying bug, an igloo as a manmade refuge in the vastness of solitude, and a crane so high above the city it allows for a good look at the bigger picture (literally and metaphorically).

Exquisitely rendered in a timeless aesthetic, “I Lost My Body” is laced with the slight imperfections of the human element to enhance the machine-conceived art, not the other way around. An animator’s tool par excellence, the human hand remains a constant beautifying force for Clapin and team, which gracefully shows.

While it may be premature to place Clapin among the masters of the medium, “I Lost My Body” is indeed an imposing calling card to ask for entrance into their ranks. Let’s start making room for him on that pedestal.