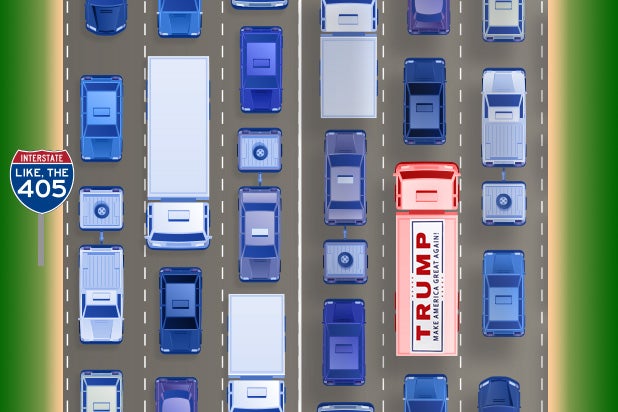 Last night, out with my girlfriend’s family, I discovered something thrilling: One of them was a Donald Trump supporter.

We couldn’t have been in a less Trumpy place: Sitting in a little Los Angeles cafe, waiting for Pete Holmes’ comedy show at Largo, where comedian John Mulaney would do a brilliant set about how politics is like “Family Feud” and Trump isn’t smart — he’s just smart for a “Family Feud” contestant.

My girlfriend and I couldn’t believe we had a Trump supporter in our midst. We’ve lived in the kinds of places where people imagine Bernie Sanders could be president — places like New York, Massachusetts, and L.A. We never get to meet people who like Trump. We were fascinated.

Also Read: Donald Trump Is a Dream Candidate, Except for One Thing

And despite what people might think about people on the coasts, we like meeting people who think differently than we do. So I asked my Trump-supporting friend a lot of questions about what issues matter to him, to learn what I could. And I’m sharing what he told me with you. (Full disclosure: I’m an undecided voter who doesn’t think much of Trump.)

The Trump supporter was a 40ish, nice, interesting white guy from the South who became a self-made success in the tech industry, without going to college. Names have been omitted so my girlfriend doesn’t get mad at me.

Trump supporter: Because of two issues: Jobs and immigration. My friends in the Midwest are getting killed trying to find jobs. You guys don’t know what it’s like because you’re on the coasts.

Me: What? I grew up in Los Angeles. My high school was 40 percent Latino. Of course I know what immigration is like.

(The Trump supporter shook his head, agreeing to disagree.)

Me: You know we’re never going to build a wall at the border, right? That’s insane.

Trump supporter: We approved it years ago. We just need the political will.

(He was talking about this, which I have to admit, I had forgotten about. Judge for yourself.)

Me: Do you want to ban Muslims?

Me: Do you seriously want to raid homes and deport 12 million people?

Trump supporter: If we did it just a few times, a lot more would self-deport.

Me: But Obama has deported people, and that hasn’t happened.

Me: How’s it going to work, logistically? What if the parents are here illegally and there are kids in school born in this country?

Trump supporter: You’re assuming the kids wouldn’t want to go to Mexico and that Mexico is a bad place. It isn’t. Immigration hurts the U.S. and Mexico, because Mexico’s best and brightest come here, and leave their country behind.

Me: What if there are disputes over which country a child belongs in? Do you remember the Elian Gonzales case? Imagine that millions of times. It would tear apart families.

Trump supporter: That’s a tough one, it’s true. But crime is also a factor. I look at the arrest records where I live, and it’s all Hispanic names.

Me: That’s anecdotal. Studies show that immigrants commit fewer crimes, maybe in part because they don’t want to risk getting arrested and deported.

Also Read: Inside Fox News' Feud With Donald Trump - Who's Winning and Why

(At this point I Googled on my phone. This Wall Street Journal article appeared instantly: “The Mythical Connection Between Immigrants and Crime.” So I attempted a rhetorical trick. I knew the Trump supporter wouldn’t care what, say, The New York Times thought. So I asked him what news outlets he trusted as reliably conservative: The Wall Street Journal, perhaps?)

Me: (At a loss for words. The phrase “open borderers” sounded like some kind of conspiratorial buzzword, but I can’t find a reference to it anywhere.)

At this point, our significant others intervened and told us not to argue. But we both protested and said we weren’t arguing, we were enjoying ourselves: That it’s important to talk with people you disagree with, because that’s the only way you learn anything.

Me: I appreciate that you don’t want to ban Muslims. We’re having a good back and forth.

Trump supporter: Yeah, this is fun.

We went down the street to watch Mulaney make fun of Trump, and shared a half-hug-half-handshake at the end of the night.