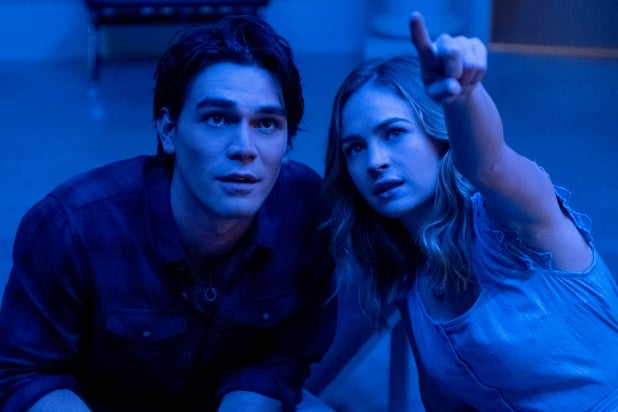 Desperate circumstances call for a miracle, which makes the pairing of the terminal-illness-romance subgenre with sacrifice-obsessed, faith-based storytelling an obvious match. As such, their fusion has now yielded “I Still Believe,” an overbearingly saccharine young love story with concert-movie undertones from writing-directing duo Andrew and Jon Erwin that’s based on Christian singer-songwriter Jeremy Camp’s career and first marriage.

“Riverdale” star KJ Apa renders Camp a wholesome college heartthrob and aspiring musician from Indiana with a go-getter attitude who, in 1999, meets Jean-Luc (Nathan Parsons, “Roswell, New Mexico”), his best friend and mentor, and Melissa (Britt Robertson, “Tomorrowland”), the girl he falls for at first sight. She is just as interested in him.

Aborting an unwanted love triangle, Jeremy and Melissa manage to get together until illness tests his commitment. Her aggressive cancer diagnosis doesn’t deter those feelings but rather incentivizes Jeremy’s determination to stay with her because the trials must be a sign from a higher power. Throughout it all, however, his professional prospects remain untouched.

Camp’s ascent from opening act to stadium stardom goes unmapped. One day he’s singing one song at a college venue, and a few months later, he’s settled as a household name preaching to large crowds. There’s no mention of a record deal, a tour, or any industry involvement aside from radio appearances where he asks his fans to pray for his wife.

No doubt the focus is the couple’s dramatic ordeal, but the absence of such details when his on-stage presence is so significant assumes the target audience either doesn’t care or is already familiar with how he got there. Melissa’s aspirations, outside of being a wife and a mother, are also not part of the equation.

Nearly indistinguishable spiritual ballads — sung on screen by the musically talented Apa himself — plague the timeline of this fateful relationship, with a duet between them at the beach early on being the most memorable. Seduction has no place in this reality, but there’s believable chemistry between the two leads. Chewing through the eye-roll-worthy lines they are given, Apa and Robertson amp up the charm in solid performances cursed by default because of the narrative vehicle.

Also Read: 'I Still Believe' Expected to Top 'Bloodshot' and 'The Hunt' at Weekend Box Office

Underused as Camp’s mother, emblematic star Shania Twain appears sporadically more like a validating cameo for the Erwins in true “look who we got” fashion than a supporting role with emotional heft. Don’t expect her to sing or play the guitar.

Risqué for this type of production, the use of popular, secular tracks like The Temper Trap’s “Sweet Disposition” scoring a trite montage, or nods to Prince, U2, and Audioslave, comes off as an attempt to demonstrate that these characters are not isolated from earthly culture. It’s ineffective in making them cooler, but stands out as a deliberate move not to outright demonize or alienate religious folks who haven’t renounced all “sinful” material.

More than most creators working in this niche, the Erwin brothers understand that making sanctimonious films devoid of any entertainment value is detrimental to their evangelical pursuits, as evidenced in their deceptively commercial feature “Moms’ Night Out.” They are simply better filmmakers who package the same tropes in more polished vessels that mostly resemble mainstream offerings.

For “I Still Believe,” they hired actors with legitimate careers beyond the faith-based world in a film that boasts above-average production value. Plenty of their shots (Jeremy and Melissa laying on their backs looking up at fake stars) and sequences are ripped directly from the doomed-lovers textbook popularized by “The Fault in Our Stars” or even “Me and Earl and the Dying Girl,” but they are executed with proficiency by the Erwins’ preferred cinematographer Kristopher Kimlin (“Run the Race”).

Sunsets, cellphone-lit melancholic music shows, and clichéd references to stars and constellations abound. Prioritizing strong writing over message delivery doesn’t seem to be an option for their business, and thus the second half of “I Still Believe” includes all the expected beats. Formulaic to the core, from the protagonist’s short-lived moment of doubt to the epiphany that sets him back on course.

“Suffering doesn’t destroy faith, it refines it,” Melissa tells Jeremy in a farewell letter that rekindles his trust in God. Instead of prompting him to call it quits on the higher power that took something precious from him, the very inexplicable tragedy is expected to make him believe more fervently.

That logic is exactly what propels most, if not all, movies along this vein: rationalizing the worst situations in life as predetermined divine decisions that fulfill a purpose in a greater plan. Keeping hope alive in dark times is a relatable human enterprise, but the constant reiteration that one person’s death is inherently special and occurs to uplift others feels far too narcissistic and ignorantly earnest for a modern world where socioeconomic status determines who gets access to a chance at surviving when sick. Of course, “I Still Believe” is oblivious to this.

Inspiration of this kind has proven highly profitable (sold-out concerts and box-office success for faith-based products back that), so there will be more. The silver lining is that at least some companies behind them are spending part of that money in making these prayer-friendly flicks somewhat watchable even if only from a technical standpoint.