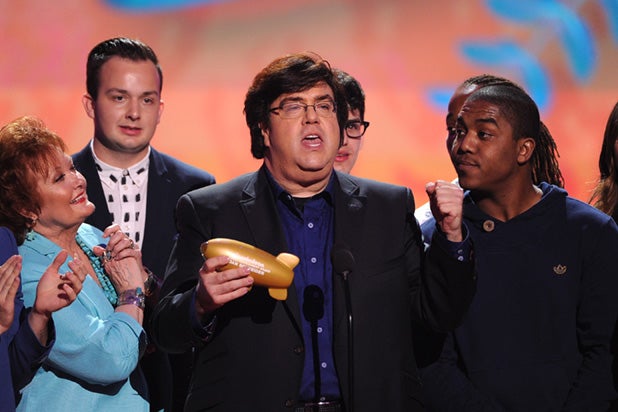 Nickelodeon has parted ways with Dan Schneider, the prolific producer behind many of the network’s live-action hits including “Kenan & Kel,” “iCarly,” “Drake & Josh” and “Victorious,” following complaints about his behavior.

The network would not discuss any specific accusations of misconduct against Schneider.

Schneider has been at the Viacom network since serving as an executive producer on “Kenan & Kel” beginning in 1996. He has since gone one to produce nearly all of the network’s live-action hits since, including “The Amanda Show,” “iCarly,” “Drake & Josh,” “All That” and “Zoey 101.”

His most recent show, “Game Shakers,” has been canceled after three seasons, but the ongoing “Henry Danger” will continue with a fifth season as planned.

“Dan and his Schneider’s Bakery team have created a string of lasting, groundbreaking hits over the years including ‘iCarly,’ ‘Drake & Josh,’ ‘Victorious,’ Kenan & Kel’ and the current number-one hit show on Nickelodeon, ‘Henry Danger,'” the network’s statement continued.

“We thank Dan and his Schneider’s Bakery producers, executives and social media team for their immeasurable contributions to Nickelodeon, and we wish them the best in their future endeavors. And Dan and Schneider’s Bakery are proud of the work they did together with Nickelodeon and will always remain big fans of the network.”

Deadline, which first reported the news of the split, linked the exit to “multiple complaints of abusive behavior against Schneider filed by members of his staff.”

When “Game Shakers” was canceled last week, Schneider had a temper “flareup,” per Deadline. He was at least partially upset over the show’s cancellation because Season 3 ends on a cliffhanger.

“For years Schneider had been under a cloud of suspicion over the treatment of some younger stars of his shows,” the publication wrote. “Among the things that have raised eyebrows are his tweeted photos of the toes of his young female stars. Additionally, there have been issues with bloated budgets and long production days on Schneider’s shows.”