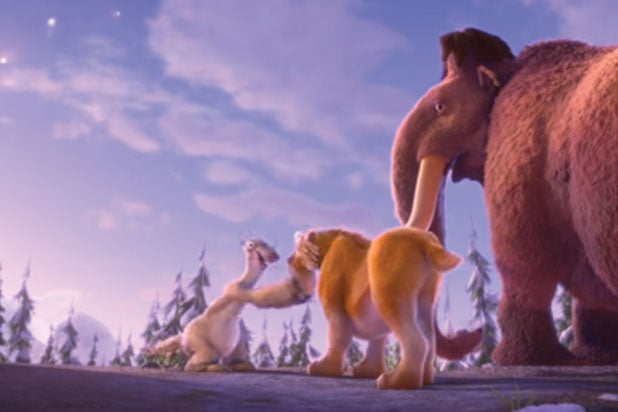 Having received a pitiable 10-percent rating on Rotten Tomatoes, the fifth installment in the ongoing series about a squirrel and his acorn failed to impress critics.

Time Out’s Tom Huddleston called the film “forgettable and pointless,” while most other critics think the Ice Age franchise has long overstayed its welcome.

“The ‘Ice Age’ movies are so utterly featureless and interchangeable that if Fox reissued an old one under a new title, it’s quite possible that no one would notice,” wrote TheWrap’s Alonso Duralde. “‘Collision Course’ offers an argument for extinction that even environmentalists could support.”

Like the previous Ice Age films, “Collision Course” chronicles Scrat’s pursuit of his elusive acorn and the calamity that invariably ensues. His quest sets off some disastrous events — again — that threaten the herd’s home and force Sid, Manny, Diego and the rest to seek new shelter.

Read eight of the frostiest reviews below.

Time Out, Tom Huddleston
“We’re five movies in, and the ‘Ice Age’ series has jumped the sloth: ‘Collision Course’ feels like it was scripted on the back of a beer mat and animated by the folks behind those straight-to-DVD Barbie movies. It’s hard to shake the suspicion that the producers looked at the dwindling quality and soaring box office of the first four films and concluded that, actually, they didn’t need to put much effort at all.”

Radio Times, Dave Aldridge
“‘Collision Course’ is very disappointing. The plot is all over the place, and too stop/start and complex for younger kids. More significantly, this fifth installment in the series largely lacks the simple charm that was so endearing in the earlier films.”

Slant Magazine, Odie Henderson
“What’s left behind is a cast of thin, coloring-book characters, perfunctorily voiced by entirely too expensive celebrity voices, staring down yet another potentially apocalyptic scenario that they will inevitably thwart, ensuring the series can continue to keep the franchise and its characters in limbo.”

New Zealand Herald, Francesca Rudkin
“But after five films the winning formula is starting to wane. There are only so many natural disasters this group of prehistoric animals can survive, and in ‘Collision Course’ things go interstellar, pushing this franchise to far-fetched limits.”

Screen Daily, John Hazelton
“The threat of extinction has always been a theme in the ‘Ice Age’ films, but there’s little real danger of that in this fifth installment of the hugely successful animated franchise. Overpopulated with barely justified subplots and new additions to its family of goofy pre-historic animals, ‘Collision Course’ is a colorful 3D romp that’s heavy on slapstick and cozy family comedy but light on real laughs and affecting drama.”

The Washington Post,  Stephanie Merry
“‘Ice Age: Collision Course,’ the fifth installment in the 14-year-long saga of animated prehistoric animals, will, with any luck, also be the last. Lazy, scattershot and excruciatingly unfunny, the movie is a hazard to the very young, who might come away with the erroneous impression that movies don’t get any better than this.”