“Straight Outta L.A.” a documentary about the Los Angeles Raiders football team from rapper-turned-filmmaker Ice Cube, will kick off this year’s Tribeca/ESPN Sports Film Festival, which will run during the Tribeca Film Festival in late April and early May.

Ice Cube’s film, which was produced as part of ESPN’s “30 for 30” series, deals with the 13 years the Oakland Raiders spent in Los Angeles beginning in 1982, when the outlaw-styled team became a favorite of the hip-hop scene emerging in South Central L.A. (ESPN photo, below: Ice Cube with Snoop Dogg at the L.A. Coliseum.) 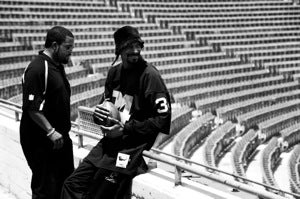 “Straight Outta L.A.” will have its gala premiere on Friday, April 23. The other six films in the Tribeca/ESP Sports Film Festival will screen throughout the Tribeca schedule, April 21 through May 2; all of them will also screen on “Sports Day,” May 1.