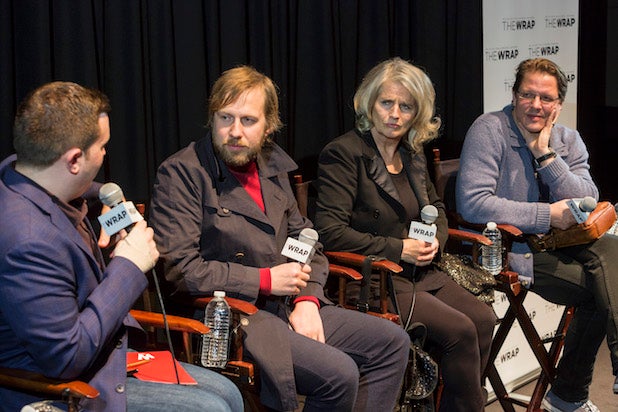 There aren’t many trees in Iceland. So having one in your backyard is cause for people to get very emotionally attached. In the Icelandic black comedy “Under the Tree,” they might even go so far as to commit violence.

“Under the Tree” is about a bitter squabble between two neighboring couples in the suburbs. A tree in one family’s backyard blocks the sun (admittedly a rarity in typically bleak Icelandic summers) shining onto the other’s patio. Everything starts awkwardly mundane, but things slowly escalate into frigid suburban warfare involving throwing bags of dog poop, leaving creepy garden gnomes in each others’ homes and threatening to cut down the tree.

The filmmakers and stars of “Under the Tree” come from a comedic background. Director Hafsteinn Gunnar Sigurðsson told TheWrap’s Matt Donnelly these sorts of domestic disputes involving trees are surprisingly common, so he can find the humor in it. But as the film has become Iceland’s official Oscar submission, his goal as a director has been to show international audiences the comedy where they might see more horror, tension and tragedy.

Also Read: Magnolia Picks Up Icelandic-Language Movie 'Under the Tree'

“The sun doesn’t shine often in Iceland,” Sigurðsson said at TheWrap’s Awards and Screening Series at the Landmark Theatres in Los Angeles on Monday. “So it’s not a true story, but it’s inspired by true legal cases. These cases get very nasty, uppity. Pets disappear. It really brings out the worst in really normal, respectable people.”

The film’s star Edda Björgvinsdóttir said she’s never cried so much in her life tapping into the spiteful, miserable depths of her character, who is grieving over the suicide of her son.

“We know that comedians who have this lighter, brighter laughing side, they have this really dark depressive side in them. We are trying to hide all our sorrow and grief, many of us,” Björgvinsdóttir said. “I have a lot of alcoholics in my family. I love them dearly. So I’ve been working with this for a long, long time. So it was a straight line for me to connect to how people who don’t work on their emotions can become cruel people.”

In a sadistic twist near the end of the film, Björgvinsdóttir’s character kidnaps her neighbor’s dog and brings it to be euthanized. But to turn the knife even further, just before leaving the dog to die, she asks the vet for the corpse, then stuffs it and leaves it on her neighbor’s doorstep.

“My main concern now is what to do with the stuffed dog. We’re thinking about putting it up for auction, for a good cause,” the film’s producer Grimar Jonsson joked. “If it gets shortlisted for the Oscar, we’ll definitely bring the dog.”