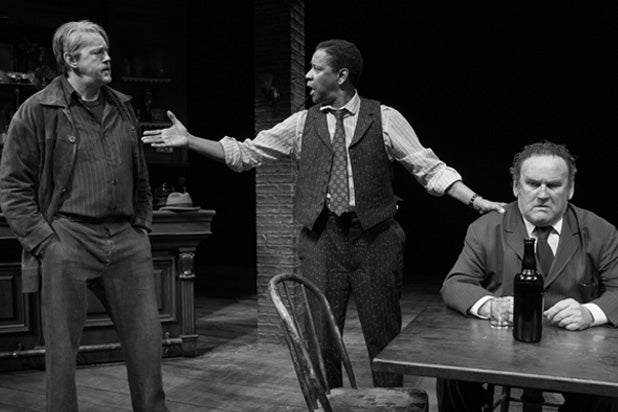 Actors’ Equity has petitioned the Tonys to add an ensemble-acting award to its annual spring contest. That request couldn’t have any stronger support than George C. Wolfe’s revelatory staging of “The Iceman Cometh,” which opened Thursday at the Bernard B. Jacobs Theatre. In a Broadway season filled with fine performances, Wolfe pushes his cast, led by Denzel Washington, to uncommon excellence.

Back in the days when Theater of the Absurd was all the rage on college campuses, Eugene O’Neill’s classic used to be taught as the ultimate in theatrical naturalism. It is four-plus hours of talk among a bunch of drunks in a dead-end bar sit around waiting for Hickey, the traveling hardware salesman, who occasionally stops in to buy everyone drinks at Harry Hope’s hotel and otherwise enliven their collective hangover.

Each of the four acts plays in real time. Wolfe’s approach is occasionally to suggest the surface realism of “Iceman,” but more often he is stripping it away to expose the play’s absurdist core. Maybe this is the “Iceman” that Samuel Beckett saw in his mind’s eye that led him to write his own masterpieces, particularly “Waiting for Godot.” Illusion and reality. O’Neill and Beckett’s characters are flattened by the one, and so they can’t live without the other.

In the beginning, Santo Loquasto’s set for this “Iceman” revival suggests more of a wasteland than a tavern, everyone lit with an unhealthy glow by the designers Jules Fisher and Peggy Eisenhauer. Ann Roth’s costumes hint at anything but the recent past, that is, until the whores show up an hour into the first act and we are clearly in the 1912 timeframe of O’Neill’s play.

Over the course of that very long first act, before Washington’s Hickey shows up, most of the 17 actors on stage look as though were painted by George Grosz or James Ensor. This is not the West Side of Manhattan, much less anywhere in America.

The exception is Austin Butler’s Don Parritt. He’s the one newcomer to the bar, the teenage snitch who has turned in his own anarchist mother to the authorities. Butler is an Edward Hopper portrait come to life, and embodies that painter’s sense of urban alienation from the moment he opens his mouth. It’s an important Broadway debut in the role that a pre-“Streetcar” Marlon Brandon rejected in 1946. (He found the drama a long, gaseous exercise, and passed on appearing in the world premiere.)

Sometimes these actors don’t even register as quite human, their respective physical features often obliterated. They all give the kind of transformational performances that have you checking the Playbill at intermission to identify who’s who, even if you’ve seen them many times in other plays.

The role of Hickey has two goal posts. The first is the character’s need to take a nap shortly after he enters the bar. It always takes audiences by surprise. Not in the case of Washington. His Hickey is a fired-up evangelist on the loose, and after a boisterous round of free drinks for everybody, he more than needs a nap. This man has done one of two things: won the lottery or murdered somebody. Washington makes it clear it’s not the former. He is ready to die, not sleep.

The other goal post is Hickey’s admission that he killed his wife because he hated her limitless forgiveness and extreme pity. That break in Hickey’s façade is O’Neill being less than subtle. As delivered by Washington, the revelation is almost old news. He made his real feelings for Evelyn evident long before the final act.

The beauty of Wolfe’s direction is that he’s able to accommodate different acting styles in his often surreal vision. Washington’s missionary Hickey makes the perfect counterpart to his nemesis, David Morse, who brings understatement to the disillusioned anarchist Larry Slade. And lost between them is the enabler Harry Hope himself, always ready with the booze, played with Irish grandeur by Colm Meaney. Wolfe achieves with actors what other fine directors this Broadway season do with turntables, wires, elevators, and dry-ice fog.

Near the end of “Iceman,” it seems perfectly natural that Washington begins his long confession by pulling a chair up to the edge of the stage to address the audience directly. In the theater next door, Glenda Jackson is giving a performance of equally high voltage in “Three Tall Women.” One of these days we can expect an earthquake on West 45th Street.