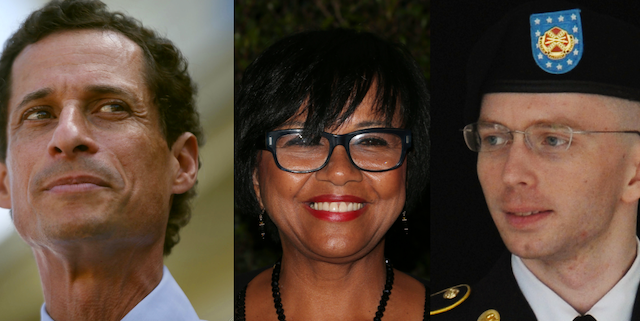 'Sharknado' Director Dishes on the Sequel, Death-Defying Stunts – and Casting David Bowie
America is obsessed with "Sharknado" and so is TheWrap, so we got the director and screenwriter to spill all about the sequel.

How 'Spectacular Now's' James Ponsoldt, Shailene Woodley & Miles Teller Saved the Teen Movie
The director and stars of the indie coming-of-age drama explain what makes their movie so gosh darn spectacular. According to Ponsoldt, it started with a great book and a great script, among other ingredients.

WikiLeaks Mole Bradley Manning Convicted of Espionage, Acquitted of Aiding the Enemy
Despite leaking the largest amount of classified information in US history, the media was largely quiet when whistleblower Bradley Manning was acquitted of aiding the enemy, but convicted of multiple charges of espionage and theft on Tueday. Although the biggest charge was dimissed, Manning is still facing a lifetime in prison.

Will Hollywood's Hillary Clinton Obsession Hurt Her With Voters?
Hollywood is planning a Hillary Clinton biopic and a miniseries, while CNN is making a documentary about the former Secretary of State. All that attention is sure to make her a superstar. The question is, will the free press boost her chances of becoming the first female President of the United States, or will the oversaturation cripple her campaign?

Casting Directors Elated, Validated Over Getting Their Own Branch in Movie Academy
It was a big week of firsts for the Academy of Motion Picture Arts and Sciences. Casting directors (finally) got their own branch, and Cheryl Boone Isaacs became the first African-American president of the Academy, too. TheWrap's Editor-in-Chief Sharon Waxman credits the latter to the Obama effect changing Hollywood.

The South Rises Again … on Cable
What do TV shows "The Walking Dead," "Duck Dynasty," "Swamp People," "The Real Housewives of Atlanta" and "Moonshiners" have in common? They are all rank somewhere among cable's 20 most-watched shows. And they're all set and shot South of the Mason Dixon Line.

Hey, Peter Jackson, Freddie Wong Is Bringing High-Frame Rate Online – and Viewers Are Flocking to It
One of the most successful online video directors is perfecting Peter Jackson's hotly-contested 48-frames-per-second filming technique, and his fans are loving it.

Anthony Weiner Communications Director Goes on Expletive-Laden Rant Against Intern
Weiner's New York City mayoral campaign didn't need any more press, but his communications director went ahead and got it, anyway. And she didn't hold back, either.

TheWrap's Entire TCA Coverage:
Kathy Bates says NBC treated "Harry's Law" like s–t, Keith Urban's returning to "American Idol," Josh Hartnett is preparing to mount a monster career comeback on Showtime's "Penny Dreadful," Will Arnett squeezed out a bunch of fart jokes while talking about his new show, "The Millers," and much, much more.

And now, here are three stories you don't necessarily need to read. But you know you want to.

Anthony Weiner's Sexting Partner Sydney Leathers: 'He Was Just This Needy Little Bitch' (Video)
How can you resist a headline like that?

Glenn Beck Says Diane Sawyer's Become 'Bigot' Since the Days He Was 'Her Little Bitch' (Video)
Glenn Beck joined Anthony Weiner's "little bitch" club. The difference, however, is that Beck volunteered for it.

Calm Your Morning Crankies With The New Grumpy Cat Grumppuccino
She can't speak a word of English, but that's not stopping internet sensation Grumpy Cat from building an empire.