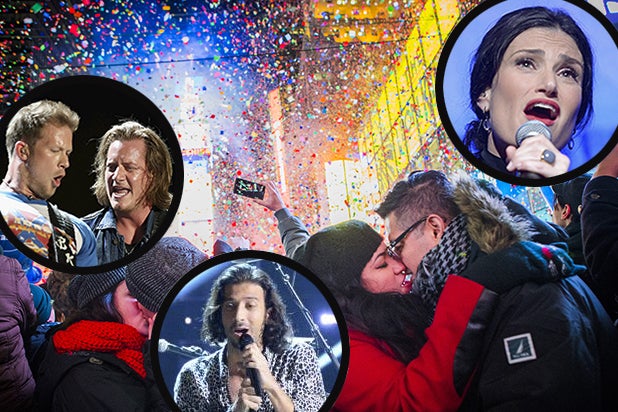 Menzel will sing goodbye to 2014 with her appropriately named Oscar-winning hit “Let It Go,” which is from the soundtrack of Disney’s “Frozen.” Pop country band Florida George Line will perform a medley of songs, including hit songs “Cruise” and “This Is How We Roll” and their latest single, “Sun Daze.” Magic! will perform their smash-single “Rude” and a newer release, “Let Your Hair Down.”

As TheWrap previously reported, pop stars One Direction, Charli XCX and Meghan Trainor will also be performing, with “Shake It Off” singer Swift set as the musical headliner for the entire evening, which is said to include a live crowd of over 1 million.

The bi-coastal celebration will see Ryan Seacrest hosting the Time Square portion of the event, along with former “The View” host Jenny McCarthy. Singer Fergie will host the Billboard Hollywood Party on the West Coast, where One Direction, Charli XCX and Trainor will perform.

The festivities will air live on New Year’s Eve night, starting at 8 p.m. ET on ABC.