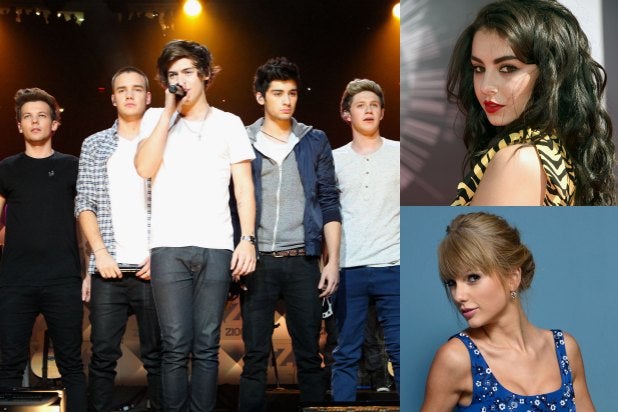 Ryan Seacrest is going to have even more famous companions helping him ring in 2015 this New Year’s Eve. Pop stars One Direction, Charli XCX and Meghan Trainor join the lineup of guests and performers for ABC’s live broadcast of “Dick Clark’s New Year’s Rockin’ Eve.” As TheWrap previously reported, the night will be headlined by Taylor Swift.

British boy band One Direction is scheduled to perform four songs throughout the night. Jenny McCarthy returns for the fourth time to host the event live from Times Square, while on the opposite side of the country, Fergie will be back for a ninth year to host the Billboard Hollywood Party and will treat the audience to a performance of her single “L.A.Love (la la.)” The song is her first new music since her 2006 hit solo album, “The Dutchess.”

Charli XCX, who co-wrote and was featured on Iggy Azalea’s number one hit “Fancy,” will also be on hand along with Meghan Trainor, whose recent single “All About That Bass” hit the top spot on the Billboard Hot 100.

The festivities will air live on New Year’s Eve night, starting at 8 p.m. ET on ABC.