No, this isn’t another rant about Ellen.

Nor is it about the lack of potential in this year’s “American Idol” contestants.

This … is about Ryan Seacrest! (Cue “Idol” theme.) 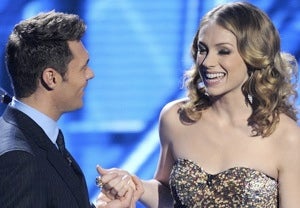 More specifically, it’s about Seacrest acting, as one message-board poster put it, like "an arrogant, overconfident jerk."

As Ellen settles in and begins to find her rhythm, and as the worst of the sorry bunch are finally getting weeded out – well, OK, not Teflon Tim Urban yet — it’s now the show’s host that is beginning to raise fans’ hackles.

Until now, Seacrest’s job role has been limited to unbiased moderator, who keeps the show moving along efficiently. But lately he seems to have added a new facet — not just bantering with Simon about tight T-shirts but actually critiquing the judges’ comments.

(See accompanying story, "What the Fans Say About Ryan.")

And, maybe worse, instead of being the contestants’ safe island, he’s begun directing intrusive questions towards them.

Cowell prefaced his devastating comments with an “I don’t want to make this any worse than it already is … ” After Cowell was through, Seacrest snapped at him, “How is that not making it any worse by saying that? What good did that do?”

Awkward silence … followed by nervous laughter and a, “Wow. Wow. Okay,” from Randy, who was so shocked he couldn’t even get out a “dawg!”

It’s deteriorated from there. A couple of weeks ago, Seacrest stepped off the stage and leaned over the judges’ desk, glowering at Cowell. Doing his best Clint Eastwood-meets-Wink Martindale, he asked for clarification on Simon’s critique of Big Mike Lynche.

“I’m actually trying to help him out a little bit, buddy, because I want him to stay in the competition,” Seacrest said through clenched teeth. “You alright with that?”

A visibly upset Cowell called this display “very uncomfortable” and repeatedly ordered (and then almost begged) the host to get back on the stage.

Indeed, the tension between these two is reaching O’Donnell-Hasselbeck proportions. 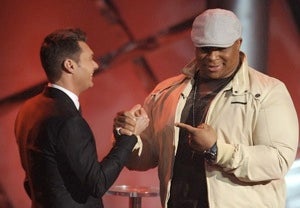 “The confrontations with Simon are becoming completely awkward,” Murtz Jaffer, host of Canada’s “Reality Obsessed” and a fan of Seacrest, told TheWrap. “It’s like an inside joke that nobody else gets.”

Fans on the official “American Idol” message boards would concur.

Nestled between the forums entitled “Ryan’s Scruff Watch” and “Was Ryan’s Hair Parted on the Other Side???” are less favorable threads with names such as “Ryan: You’re Not Funny, You’re Rude!” and “Ryan Seacrest Out of Control.”

User “Silver9” summed up the opinions of many on the boards: “Ryan has been acting seriously odd this year. I don’t know if it’s AI themselves who told him and Simon to act up a little or if Ryan is just getting complacent in his job. Whatever it is I hope he mellows out.”

Perhaps these exchanges are meant to replace the Seacrest-Simon banter of old.

“The gay-baiting Ryan and Simon used to engage in is gone — it ended last year when Adam Lambert was a contestant,” MJ Santilli, creator of what is arguably the go-to site for “Idol” news, mjsbigblog, told TheWrap. “With Ellen on the judges’ panel, it’s gone for good. As juvenile as that was, the teasing between Simon and Ryan was always good-natured, never mean or aggressive.” 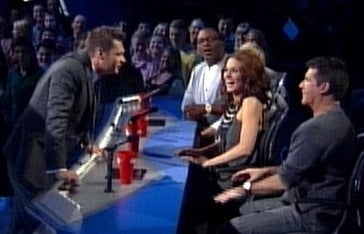 Speaking of DeGeneres, Seacrest also has targeted her a time or two. When he made a rude comment about her not being a natural blonde, She of the Endless Good Humor did not look amused.

In addition to the host-judge showdowns, Seacrest also seems to be participating in a cruel game where he hunts for the contestants’ tear triggers, whether it’s Katie Stevens and her Alzheimer’s Grandma or Casey James’ past as a “jealous guy.”

Then there was his graceless investigation into how Aaron Kelly could possibly sing a love song if he’s never been in love. Or how about when he put personal trainer Big Mike on the spot by asking him if he had any diet and exercise tips for Ruben Studdard — because nobody’s vulnerable when talking about his morbid obesity on national TV.

The most talked-about example of the New Ryan was his interrogation of Didi Benami after her performance of “What Becomes of the Brokenhearted?”

He repeatedly asked her why she sang that song — after she had given a perfectly acceptable answer about how moving the song was to her. She didn’t want to get into how it was dedicated to her friend who had passed away.

Benami looked uncomfortable and, in case there was any doubt, even described Seacrest’s questions as, well, “uncomfortable.”

So what’s up with the Barbara Walters act? The message boards are full of this topic, as well.

User “Moz3”: “So far the past few weeks I am really starting to dislike Ryan. From his badgering the contestants seemingly to try to make them squirm to his constant attacks on Simon that aren’t even remotely funny. Be the MC and not the arrogant, overconfident jerk you’re turning into.”

Movieline TV critic Louis Virtel says he finds the questions to be “ … hilarious, especially since they never cover new ground. We knew about Katie’s grandma already. He’s definitely trying to build telegenic ‘moments’ with those contestants, — but I think he misreads the hell out of them sometimes … Ryan read [Benami] as the wounded pre-teen who just wants to meow about feelings and awesome dead friends.” 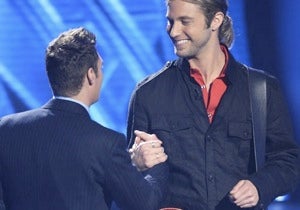 "My honest opinion is that they’re trying to extend the meaning of what ‘AI’ is, or at least that’s what he’s trying to do,” Murtz Jaffer said. “I think he’s trying to make it seem like this is kind of like, believe it or not, ‘The Biggest Loser,’ where we have to tell these people’s stories and so people know who they’re voting for and I think that is not the right move. This is not E! ‘True Hollywood Story.’"

“I think it’s part of a strategy that goes hand in hand with the backstage glimpses we’ve been getting of the contestants,” said Santilli. “It’s an attempt by the producers to get behind the contestants facades to see some raw emotion. I don’t think it’s working out very well.”

“What sets ‘AI’ apart from other reality shows, is that fans generally don’t like to see contestants upset or mistreated, so the producers have to tread very carefully with this strategy,” Santilli added. “Badgering contestants into tears, anger or sadness could create a backlash.”

Longtime “Idol” blogger Richard Rushfield – first for the L.A. Times and now for the Daily Beast — disagrees:  "These were kind of obvious things to talk about … Both Katie and Didi had talked about those things on camera before … It wasn’t coming out of nowhere. For whatever reason, at those moments they clammed up."

One thought is that Seacrest is posturing himself as the real star of the show in anticipation of Cowell’s departure. In fact, on the results show that aired the day after the the big stare-off, Cowell even asked, “Do you want my job? Because it felt like an audition.”

Indeed, Seacrest does seem to be spending more time at the judges’ table this season.

Jaffer, who has trademarked the title “World’s Foremost Reality TV Expert,” entertains the idea: “Could he be doing it because he wants to show a mean streak, which might make him a more objective judge?”

But experts like Virtel and Rushfield insist that Seacrest knows his place on the show and doesn’t see himself as the star.

“Ryan Seacrest does not make mistakes, so any theory based on the idea that Ryan Seacrest is flubbing is invalid because that’s not possible,” said Rushfield, whose book “American Idol: The Last Empire,” is due out in January.

Another “Idol” expert agrees, saying if anyone is responsible, it’s the producers of the show – Seacrest would not mess with a winning format without permission.

But no matter who is creating these moments, the bottom line is that they’re not working for an increasing number of viewes.

“If it’s staged or scripted — someone needs to provide new direction,” says “persncketyboo.” “If it’s not scripted — then come on, you are paid enough money to pretend and make this more enjoyable for the watchers. I too have started TIVOing the show just to avoid those petulant moments.”