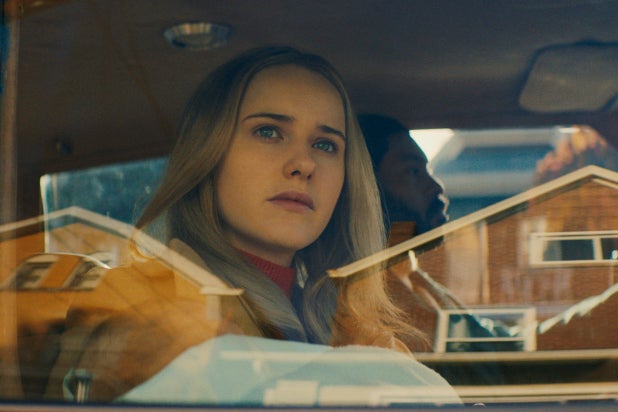 Rachel Brosnahan stars as a young wife and mother who has almost no idea where she’s going next in AFI Fest 2020 opener “I’m Your Woman,” and director Julia Hart excitingly puts the audience in a similarly unpredictable position. It’s a road trip, it’s a story of a woman in trouble, and it’s about fleeing the scene of the crime, but the film refuses to follow the established path audiences might be expecting.

Many contemporary filmmakers shoot for that gritty yet personal sweet spot of 1970s “New Hollywood” honesty and intensity, but few have captured it with the finesse of Hart, who shares screenwriting credit with her husband Jordan Horowitz. A talented filmmaker who’s not being talked about nearly enough — her last two credits were the incisive and humane “Miss Stevens” and the arthouse superhero saga “Fast Color,” both acclaimed yet underseen — Hart has created a film that falls somewhere between “Alice Doesn’t Live Here Anymore” and John Cassavetes’ “Gloria” on the spectrum of female-centric character studies.

Jean (Brosnahan) is introduced as an unhappy 1970s housewife, languishing in a gorgeously of-the-moment residence and unable to have a child. And then her husband Eddie (Bill Heck, “Locke & Key”) brings one home with no explanation of the child’s provenance. And then one of Eddie’s friends shows up in the middle of the night, puts $200,000 that had been stashed in Eddie’s closet into a suitcase, and tells Jean that she and the baby need to flee, right now.

We soon learn what Jean already knew — that Eddie was a thief — but what Jean doesn’t know about Eddie is enough to fill the rest of the movie, as Jean stays on the move, looking out for herself and the baby with the help of Cal (Arinzé Kene). Over the course of her flight from danger, Jean will discover her own strength and her capacity to take care of herself and of others.

Among the many accomplishments of Hart and Horowitz’s smart and suspenseful script is the fact that, while Jean gets help from Cal and several other Black characters over the course of the film, those characters — including Marsha Stephanie Blake (“When They See Us”) as Teri and legendary scene-stealer Frankie Faison as Art — have backstories and motivations of their own. They are part of the film’s intricate tapestry and are definitely not just sitting around to be useful to a white character.

Also Read: Rachel Brosnahan to Star in Life-Swap Dramedy 'The Switch' at Amblin

Viewers who know Brosnahan only from her snappy patter on “The Marvelous Mrs. Maisel” will discover new shades and depths of this performer, as she evolves from fear to fearlessness, from helplessness to agency. She takes a woman who could have been merely exasperating and makes her both a moving character and an effective audience surrogate, almost never knowing any new plot detail before the viewer does.

Kene (so powerful in a British indie called “The Pass,” which was an LGBTQ festival fave) and Blake both skillfully keep their characters’ secrets close to the vest, revealing them deliberately over the course of the story and building to the film’s powerfully emotional climax. Heck and Faison make the most of their relatively brief appearances, as does Marceline Hugot as a helpful (or is she?) neighbor who reaches out to the fugitive Jean with kindness and hot dish.

It’s always tempting for costume and set designers to go wild with the garishness of the Me Decade, but cinematographer Bryce Fortner (“Ingrid Goes West”) keeps the colors muted, and the overall toned-down look allows for occasional moments of excess (a disco dress here, a hot-pink Styrofoam carton of eggs there) to pop all the more.

“I’m Your Woman” is a portrait of a damsel in distress who learns, with help and guidance, to become her own knight in shining armor. She is maternal, and she is faced with violence, but it is somehow the combination of those factors, rather than simply one or the other, that allows her to come into herself fully. It’s an exciting ride, but with a wallop of genuine feeling underneath that makes it one of this year’s best films.