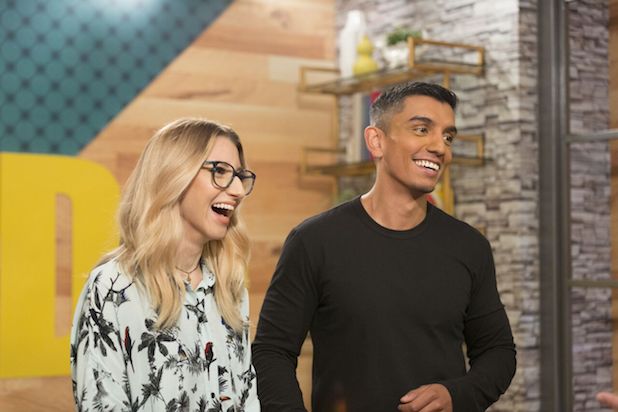 IMDb has announced the launch of its first weekly web series, “The IMDb Show,” which will be available on IMDb.com, the site’s mobile app and all social media channels, TheWrap has exclusively learned.

The series will feature movie and television news through the perspective of IMDb’s data and research, as well as interviews with celebrities and industry analysts about hot topics in Hollywood and which upcoming releases they are most interested in seeing.

“The IMDb Show” will be hosted by Tim Kash, formerly of MTV News, and Kerri Doherty, writer for ABC’s “The Goldbergs.” Kevin Smith, who is an executive producer on the show, will be a contributor on the series.

In addition, the show will leave its Studio City, Calif., set for on-location episodes at special events, starting next week with a special episode at the Sundance Film Festival in Park City, Utah.

Thursday’s premiere episode of the show, which you can watch here, features “This Is Us” star Chris Sullivan, with upcoming guests including Smith and “La La Land” producer Jordan Horowitz.

“Whether I’m covering Sundance or Comic-Con, I have loved working with IMDb the last few years,” said Smith. “So when the IMDb team asked me to get involved in The IMDb Show with Tim and Kerri, I instantly said yes. I mean, you can never have too many credits from IMDb on your IMDb page.”

“IMDb was built by and for a community of uniquely passionate and informed fans,” said Col Needham, IMDb’s Founder and CEO. “The IMDb Show, our first-ever weekly studio show, will reflect their curiosity and interests. Our vision is to host an informative, entertaining conversation around the shows, movies and talent that our customers are obsessed with, leveraging IMDb’s unique and authoritative data to enrich the weekly entertainment conversation and inform viewing decisions.”

Each week, “The IMDb Show” will offer an array of segments, including:
-The IMDbrief: Timely segments that use IMDb data and information, including IMDbPro’s exclusive research tools, to take a deeper look at movie and TV topics that are currently in the zeitgeist, as well as those that will be soon.
-On Location: Segments filmed on location with fans and industry insiders which will reveal the personalities and stories behind the “magic” of movies and television.
-Close Up: An intimate conversation with a featured celebrity guest which will help fans learn more about the stories behind their IMDb credits and trivia, their current and upcoming projects and what’s on their IMDb Watchlist.
-The Watchlist: The IMDb Show hosts and guests share the TV shows and movies they are most looking forward to watching.
-The Trailer Trailer: A mash-up of the best clips from each week’s new trailers.

12 Movies You Forgot Samuel L Jackson Was in, From 'Out of Sight' to 'Jurassic Park' (Photos)

Samuel L. Jackson's is opinionated, talented and also prolific. His IMDb page is seemingly endless, with 172 credits to his name. Flip through this slideshow to see some of his roles you may very well have forgotten about.