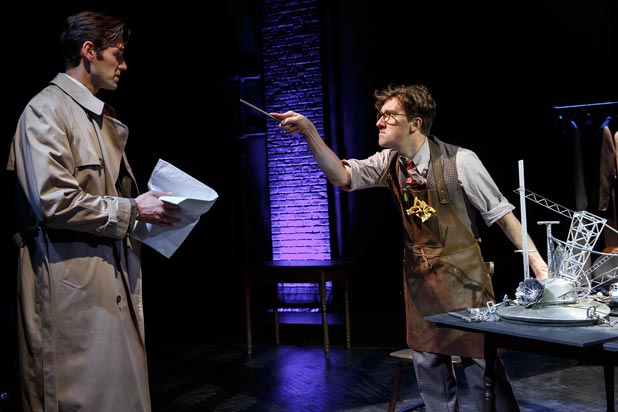 Nick Jones tries something completely different in his often hilarious, always hallucinatory new comedy, “Important Hats of the Twentieth Century,” which opened Monday at MTC’s Studio at Stage II. Eschewing prison garb and lot more, the “Orange Is the New Black” writer-producer has written a camp classic for a nearly all-male cast.

When “Hats” is revived in the future, there’ll be no roles for drag queens. No Charles Busch or Lypsinka taking over the leads. No takeoffs along the lines of a reverse-gender “Caged” or “The Women” or “The Bad Seed.”

One of the dictums of camp is that heterosexuality is the biggest joke of all. Since the word “camp” is code for gay, Jones achieves the equivalent of pouring chocolate syrup over fudge in his “Hats” when he has a same-sex romance blossom between a hard-nosed reporter-critic, T.B. Doyle (John Behlmann being as outrageously stolid as he is handsome), and a high-fashion designer Sam Greevy (Carson Elrod impersonating Isaac Mizrahi right down to the mad-as-a-hatter hair).

This mash-up of ideas is ingenious. Think “The Fountainhead” reimagined as “The Fashionhead.” It’s as if Jones has channeled Ayn Rand, turning her architect Howard Roark into his fashion designer Greevy. Jones’ outrageous take gets even richer when he introduces rival designer Paul Roms (Matthew Saldivar, insane but in a  good way), a hack whose idea of being innovative is to design sweat shirts and sneakers and other ill-fitting clothes that average people can enjoy because their bodies suck.

I forgot to mention: The year is 1937, and Roms gets all his bad but popular fashion sense by traveling into the future via a “time hat” invented by a mad scientist (Remy Auberjonois, brilliant in a variety of roles) who ends up being tranquilized by a serum he concocted to make cats less selfish.

At this point in the review, either you’ve stopped reading or you’ve already purchased tickets for “Important Hats of the Twentieth Century.”

For that significant minority still reading, Jones’ “Hats” is a brilliant take-down of modern culture, from the trend of “blue jeans in restaurants and T-shirts in the theater” to the total pretentiousness of Fashion Week, with its ethic of “it’s not a knock-off if it hits the market first.”

But there are a couple of caveats worth mentioning: Getting back to “The Fountainhead,” I missed a tortured Patricia Neal-type vamp in Jones’ story. Really, a comedy about high and low fashion with a cast of seven men and only one woman (Maria Elena Ramirez essays a few minor, faceless roles)? C’mon! Male characters can never compete with women when it comes to hair, makeup, clothes and neurotic sex. It’s why men playing women is funny and the reverse almost never is.

The Greevy character makes his name by designing for a movie star whom he accidentally turns into a vegetable when her neck muscles aren’t strong enough to support his brand-new 200-pound metal hat. As described by two reporters (Auberjonois and the perfectly unctuous Jon Bass), that debacle is funny to hear. But in a show about clothes, we need to see Julie Bourdain on the red carpet! You can’t keep her off stage. That’s Charles Ludlam 101.

When it comes to manic behavior on stage, director Moritz von Stuelpnagel shows that his staging of Broadway’s “Hand to God” was no fluke. There’s a problem, however, with MTC’s Stage II.

It seats only 150, but its thrust stage is too big and open for this show, which needs the characters to be bouncing off each other, as well as three walls, not just the one upstage. There’s a reason the funniest scenes in so many screwball comedies of the 1930s were set on the cramped quarters of a train.