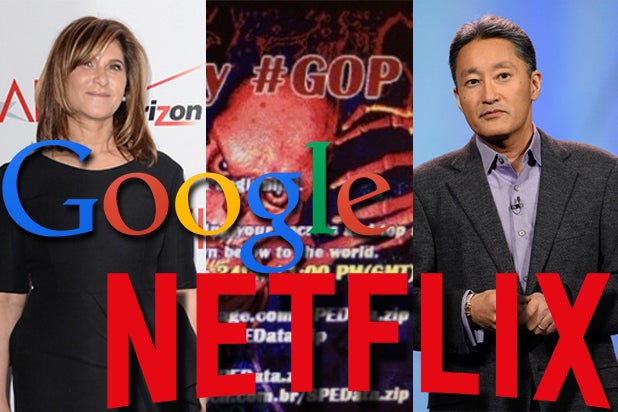 The year 2014 was anything but normal, but none of it was apparent until the year was nearly over – November 24, the day the Sony hack attack unfolded.

At that moment, Hollywood was turned upside down.

The implications of the hack are still playing out, but they will be profound for an industry that for too long has resisted the change clamoring outside its window. Change has now come charging through the front door.

Deep in our marrow all of us know what happened to Sony may have been bizarre, may have been unpredictable, may have been too outrageous for a Hollywood script. Nonetheless, it was a debacle waiting to happen, and one that could similarly befall any major entertainment company.

The immediate repercussions of the are still in mid-ripple. Most in the industry and on Wall Street seem certain that Sony Pictures co-chairman Amy Pascal will lose her job (after a decorous though undetermined period of time).

Fatally damaged and apparently living inside a bubble, Pascal has no desire to leave her longtime perch, and no pressing inner voice telling her to step down for reasons of corporate responsibility. In a painful moment this week, TMZ ambushed her and husband Bernard Weinraub at the airport on their way home from a holiday and when asked if she thinks she will keep her job Pascal responded: “I hope so.” This from a corporate leader who has called a half-dozen industry colleagues to apologize preventively, in anticipation of what offenses may still emerge from her email outbox.

While less personally embarrassed, the fate of chairman Michael Lynton is also very much an open question. After all, he is ultimately responsible to Tokyo for the studio’s performance and for the slipshod handling of the hacking episode – underestimating early warning signs of danger, slow to realize the depth of the damage (he was in New York for Thanksgiving as the studio stood paralyzed) and then pulling the “The Interview” from its planned release, leading to a national, bipartisan outcry against the decision. His eleventh-hour reversal was a wise move to salvage things, but it will not erase the memory of his leadership decisions. (Tokyo may also be less than amused to learn of his attempts to find job opportunities at NYU and elsewhere.)

Then there is the question of what will happen to the studio itself. Will Tokyo finally decide that the entertainment division no longer fits into a corporate entity focused on hardware? Might Kazuo Hirai decide that the negative blowback is not worth the trouble? At least one banking source has told me that an overture has been made to buy Sony Pictures. It is knowledge in the investment banking community that Sony has been unofficially available for some time. That potential instability will hang over the studio’s head for the next period to come.

When one major studio is dealt a body blow, every other major studio feels the pain. The industry has always been interconnected, and it would be folly to wish for anything but Sony’s recovery.

Which brings me to the other profound implication of the : the last-minute distribution of “The Interview” as a day and date release — in 331 independent theaters and major streaming services including Google Play, YouTube Movies and Xbox Video. This is the reality that major theater chains have dreaded and tried to prevent for years.

Now it has happened, by default. The future has been forced upon Hollywood, and the results are instructive: “The Interview” quickly became the number one rental on those streaming services and took in $15 million compared to less than $3 million over its theatrical opening weekend. Having gotten a taste of mass entertainment, there will be no putting the genie back in the box for Google and Microsoft.

So, brace yourselves for an upcoming battle between the old guard theater chains and the upstart streaming services. And as far as talent goes, the Seth Rogens and James Francos of the world may now find themselves more inclined to support the streaming services that supported them in their hour of cyber-terror rather than the theatrical chains that left them high and dry.

It seems that every year I write a column urging the entertainment industry to seize the future and to embrace change. I still believe that. But this year change came to our doorstep.

Ready or not, the future is here.