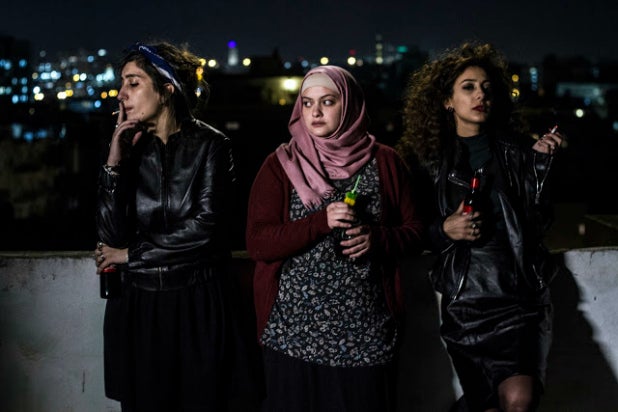 To whom does the title of Maysaloun Hamoud’s assured, empathetic debut “In Between” refer? To her characters, of course, who are stuck in between their conservative cultures and their liberal desires. But also to Hamoud herself, who has been both widely praised and roundly condemned for her blunt take on the lives of young Arab-Israeli women.

The fictional friends who’ve earned such disapproval are Laila (vibrant standout Mouna Hawa), Salma (Sana Jammelieh) and Nour (Shaden Kanboura), 20-something roommates in Tel Aviv. Laila is the rebel, a chain-smoking, hard-partying Palestinian lawyer. And Nour is her obvious opposite, a pious Muslim student preparing for her upcoming marriage to Wissam (Henry Andrawes). Salma hovers somewhere in the middle, a tattooed DJ who dutifully returns home for family dinners to meet the potential husbands her Christian parents keep presenting.

But even as everyone else seems determined to classify them in simple terms, Hamoud gives the ladies plenty of space to define themselves. Nonconformist Laila is actually thrilled to have found a soul mate in her hipster boyfriend Ziad (Mahmud Shalaby). She’s even hoping he’ll want to settle down together. But she can’t help noticing that he refuses to introduce her to his family, and subtly suggests she tone down her unruly ways.

Salma’s parents have put up with her modern manners too, to a point. They’ve even allowed her to sow her oats in the big city, until they find a suitor she’ll accept. But when they learn she’s a lesbian? Their generosity and understanding disappear with stunning speed.

As for Nour, she really does want to be a good daughter, a good wife. But her notions of devotion contrast painfully with those of her ostentatiously religious fiancé. As Wissam pushes her to give up her studies, her apartment, her job, we see the doubt flickering in her eyes. We also see the conflict, as she tries to reconcile deeply-held cultural and spiritual values with a system that seems not to value her much at all.

Mahmoud and her cast do a wonderful job showing us just how much strength it takes to push back against a lifetime — really, eons — of accepted tenets. Everyone who has a stake in the status quo urges our heroines to uphold it. To go along, to get along, to look the other way. With a dismissive shrug Ziad asks an outraged Laila, “You want to change the world in one day?” Her response has an urgency he can’t begin to understand. Nor would he want to.

Because despite the denouncements against her (including a fatwah), Hamoud’s target isn’t religion, or politics, or culture. It’s hypocrisy. It’s the rot at the base of entitlement. It’s the unexamined victimhood of patriarchal traditions. Oppression, it appears, is universal.

There are moments when the film’s well-earned outrage feels a bit broadly drawn, as when the friends enact a too-easy revenge on the most brutal villain. But by that point, we’ve become fully invested in their victories, however large or small they may be. And that’s because Hamoud so deftly mixes both the intimate and the enormous throughout, endowing vibrantly-shot, slice-of-life storytelling with an often wrenching depth.

To outsiders, Laila, Salma and Nour look like any other young women finding their way in the 21st century. But as the haunting final image suggests, their ordinary lives are anything but effortless.