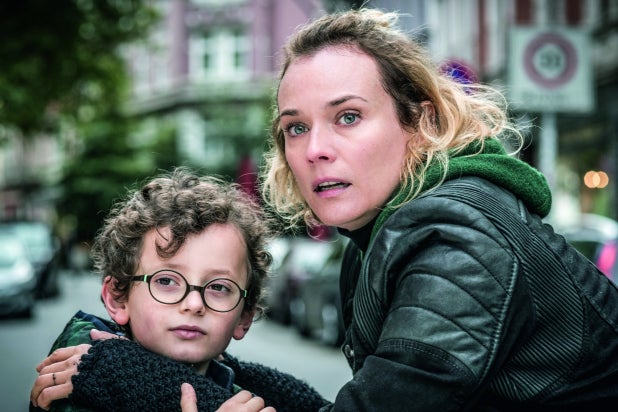 Diane Kruger’s startling blues are a force of their own in “In the Fade,” the German grief thriller from Fatih Akin (“The Edge of Heaven”) that asks the actress’s eyes to convey a potent range of emotions while the character behind them decides just how far she needs to go to find justice after a violent tragedy.

It’s not hard to see why Kruger won the Best Actress prize at Cannes this year for her performance, and though the movie around her (Germany’s submission to the Academy Awards) can at times feel like a standard-issue vengeance saga, the light in those soul windows of hers — whether brilliant, drained, fiery, or coolly determined — justifies the effort.

Returning to her native language after years in English-speaking roles, Kruger plays Katja, a tough, tattooed, leather-wearing wife and mother living in Hamburg. Her loving husband Nuri (Numan Acar, “Rosewater”) is a Kurdish immigrant making a solid living for them and their young son Rocco (Rafael Santana) after spending four years locked up on a drug charge. (The movie opens with video footage of their behind-bars wedding, a joyous-looking occasion despite the environment.)

Returning to Nuri’s storefront office one night after spending time with a pregnant friend, Katja discovers that a bomb has gone off in front of her husband’s business, killing both him and Rocco. As if the emotional devastation of losing her entire family at once weren’t enough, the hurt is compounded by the reactions of her in-laws — who blame Katja and who wish to leave Germany and take their son’s and grandson’s remains with them — and of her mother, who assumes Nuri had returned to drug-dealing and has no qualms saying so to the police.

The straw-breaking insult is that the authorities don’t believe Katja’s theory that Nazis committed this heinous act. They assume the culprits came from within the immigrant mafia, even though Nuri’s work as a translator and tax preparer within the community, she informs them, invariably involves contact with transplants of all stripes. Not helping matters in persuading the police is Katja’s own unapologetic drug use, to which she turns to numb her crushing grief, and which doesn’t go unnoticed by the investigators.

(The impetus for Akin’s screenplay, written with Hark Bohm, was a notorious murder spree of Kurdish and Turkish businessmen by neo-Nazis in Germany in the early 2000s that went unsolved for years because investigators looked only within the victims’ ethnic community.)

But when a pair of young, married, Hitler-loving suspects, Edda and André Möller (Hanna Hilsdorf, Ulrich Friedrich Brandhoff), are arrested with convincing evidence against them, Katja allows herself to claw back to the world to see justice through with the help of family friend and lawyer Danilo (a kind-eyed Denis Moschitto), who represents her at the neo-Nazi couple’s trial.

After a first section marked by overwhelming sadness, constant rain, and long, powerful takes of Katja in a kind of consumed shock, the trial sequence — set in an all-white courtroom of rigorous geometry and seething looks from Katja toward the scowling defendants — hardly feels like a recovery. In terms of wanting closure for Katja, it’s even more tense. She must not only live through the crime’s particulars all over again, but also endure the kind of questioning from the defendants’ brusque lawyer (a forbidding Johannes Krisch) that puts the focus entirely back on Katja’s picture-unperfect victimhood.

Also Read: Diane Kruger Has 'Yet to Be Paid the Same Amount as a Male Costar'

There’s a fleeting moment of shared sorrow when the male defendant’s dad (Ulrich Tukur, “The Lives of Others”), testifying against his own son, tries to make a connection with Katja that conveys his own shameful woe. But in a world where we tolerate some extremists more than others — a scenario that feels familiar in today’s America as it flirts dangerously with “understanding” white supremacists — is after-the-fact regret too little too late?

[Warning: spoiler-ish vagueness ahead.] Akin isn’t done with Katja, though, and in the final nail-biting act, set in Greece against a shimmering, tranquil sea, we’re asked to see this wrung-out heroine as something else entirely. It’s the kind of genre-friendly sequence we’re used to from pulpier movies, but in the context of a tale of institutionalized prejudice and psychological disintegration, Akin manages to give it a flinty weight as we grip the armrests.

Once again, Kruger is entirely commanding: there’s little about her in these moments that isn’t, somehow, an expression of consuming anguish, even when she’s on a very particular mission, one designed to raise questions as much as to slam others shut.

Stylistically, Akin is once again as assured as ever with “In the Fade,” with regular cinematographer Rainer Klausmann turning the first half’s heartache-stricken darkness and the closing sequences’ scenic sunniness into bookends of thematic richness. A Queens of the Stone Age fan, Akin also tapped its frontman Josh Homme for the score, which is suitably evocative in generating suspense, or reflecting the strickenness of Katja’s experience. But none of it would have been as effective without Kruger’s front and center turn, easily a career best.