The big selling point for “In the Heart of the Sea” is that it’s based on the true-life incident that inspired Herman Melville to write “Moby-Dick,” but that’s like pitching a movie version of “Holinshed’s Chronicles” by saying it led to “Macbeth.” Why film the truth, to paraphrase “The Man Who Shot Liberty Valance,” when you can film the legend instead?

That’s a question that director Ron Howard and screenwriter Charles Leavitt (“Seventh Son”) never quite answer in this sweeping film, although they have managed to make the whales the most compelling characters in this account (based on Nathaniel Philbrick’s award-winning book) of the sad fate of the whaling ship Essex in the early 19th century.

See Video: Chris Hemsworth Faces a Furious Sperm Whale in New 'In the Heart of the Sea' Trailer

Like the recent “The Walk,” “Heart of the Sea” excels at its digital fakery – in this case, making enormous sperm whales seem real, and deadly, as they interact with men who go after them armed only with harpoons, ropes and life rafts. As with the Zemeckis film, however, the computer-generated images are too little, too late, since the writing has failed to bring us into this world and to care about the people who are risking their lives.

Melville (played by Ben Whishaw) brackets the film; a young writer with a few novels under his belt, he travels to Nantucket to meet Thomas Nickerson (Brendan Gleeson), an older man who, as a child, crewed on the Essex and is now, years later, the last survivor of the doomed voyage. Nickerson has no desire to dredge up the ghosts of the past, but with Melville offering him all his savings — and Nickerson’s wife (Michelle Fairley, “Game of Thrones”) understanding that her husband needs both the money and the emotional release of telling someone his story — the old salt finally consents. 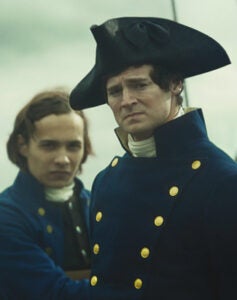 As a ten-year-old orphan, young Thomas (Tom Holland, “The Impossible”) was a greenhorn when he boarded the Essex under the command of first mate Owen Chase (Chris Hemsworth). Chase thought he’d finally have a chance to be captain, but the merchants funding the voyage instead placed first-timer George Pollard (Benjamin Walker, “Abraham Lincoln: Vampire Hunter”) at the helm, because of his family’s social status in Nantucket.

The two officers’ personal friction notwithstanding, the expedition seems to be going well when we see the crew capture their first whale, but during a stopover in South America, the men meet a Spanish captain (Jordi Mollà, “Riddick”), who tells of an alabaster-white leviathan that decimated his crew and took one of the captain’s arms for good measure. Needing more blubber to fill their ship, Pollard and his crew give chase, with horrifyingly tragic results.

Leavitt’s screenplay is a frustrating one, filled with good ideas and terrible ones. In the plus column, there are the scenes that break down the process by which whales are captured and then stripped for parts at sea, plus the fact that these whalers never explain to each other terminology they’d already know. If that means the audience has to use context to figure out the names of certain sails or knots, so be it.

Also Read: 'In the Heart of the Sea' Actor Edward Ashley Joins Charlie Hunnam in 'Lost City of Z' (Exclusive)

What undoes the better writing is the lack of interesting characters; these real-life figures are reduced to types (the working-class guy who’s the best at what he does, the snob with a title he hasn’t earned, the plucky kid looking to make good, etc.) who never engage. For much of “Heart of the Sea,” the movie makes an implicit and fairly clear connection between the whaling industry of yore and the petroleum industry of now, risking the lives of men and disregarding the environment in the pursuit of profit.

But Leavitt and Howard can’t stop themselves from underlining this idea, having a character express amazement at the end of the film that they’re getting oil out of the ground now, whaddaya know? It’s the same sort of sandwich-board announcement that pops up periodically in Howard’s movies (“Frost/Nixon” comes to mind), where the director doesn’t trust the person in the back row to get what the story’s about.

With the exception of Whishaw and Gleeson, who spend the film sitting around a table, the cast spends more time being physical rather than reciting dialogue, and that’s good news for Hemsworth, who’s always an imposing presence but never quite nails the chow-dah New England accent he’s going for here. (He comes off better in Howard’s far superior “Rush.”)

Cinematographer Anthony Dod Mantle gets to work in a vast array of lighting choices, from the whale-oil lanterns of Nantucket to the merciless sun beating down on the South Pacific sea. He and the effects team make the whaling sequences seamlessly believable, and there’s a shot of a burning ship sinking at night that recalls the oil paintings of the era.

Lovers of spectacle for spectacle’s sake will come away from the film with many discrete sequences to admire, but there’s not enough of a human element to bridge them together. In terms of its lasting power, “In the Heart of the Sea” roars in like a great tide, but then just as quickly dissipates.