While the U.S. box office has taken big strides in getting back to normal over the last two weeks, theaters are hoping that Warner Bros.’ “In The Heights” and Sony’s “Peter Rabbit 2: The Runaway” will kick the recovery process up to a new level.

Jon M. Chu’s adaptation of Lin-Manuel Miranda’s Tony-winning musical is heading to theaters with widespread acclaim behind it. Critics have given a 97% score on Rotten Tomatoes with many declaring it the first contender in the 2022 Oscar race.

Analysts and rival distribution execs have also pointed to “In The Heights” as having the perfect formula for a post-COVID summer title. It’s vibrant depiction of Latino immigrant culture, combined with actors and filmmakers of color in the credits, is expected to bring in a diverse array of moviegoers while its upbeat vibe and bright musical numbers promise a respite from the misery of the pandemic. Audiences seem to be recognizing this, as a poll of 1,300 moviegoers by Fandango revealed that 96% plan to make “In The Heights” their first trip to theaters since the COVID-19 shutdown.

As usual, studios are keeping estimates low as post-pandemic uncertainty lingers, but the success of “A Quiet Place — Part II” with its $48 million 3-day/$57 million 4-day launch is raising expectations for films like “In The Heights” that have more general audience potential. Analysts who spoke to TheWrap predict at least a $25-35 million opening for the film but say the film has much greater upside. If the film opens above $35 million, it will have posted a higher opening weekend than the 2018 summer musical “Mamma Mia!: Here We Go Again.”

“We’ve seen with films like ‘Crazy Rich Asians’ and ‘Black Panther’ that there’s a lot of walk-up ticket sales from audience groups that don’t always show up in the tracking, leading to numbers that beat expectations,” Boxoffice analyst Shawn Robbins said. “Add that to the fact that we are seeing presales for new releases peak much closer to opening day and it makes a film like ‘In The Heights’ very difficult to gauge.”

For the most part, those unpredictable factors work in favor of a strong opening for “In The Heights,” except for one: the film isn’t a part of an established franchise.

“Warner Bros. has done a good job getting out the marketing on this film and selling its connections to ‘Hamilton’ and ‘Crazy Rich Asians,’ but we haven’t seen a film that isn’t a sequel post big numbers in this post-COVID market yet,” Robbins added. “Our tracking has been as low as $20 million and as high as $45 million because it’s just so difficult to figure out how much pre-release buzz there is. But on the bright side, films like ‘The Greatest Showman’ have shown that musicals can overcome a tepid opening, so this film could last on the charts for quite some time.”

“In The Heights” follows Usnavi, a bodega cashier in New York’s Washington Heights who dreams of returning to the Dominican Republic to restore his father’s beachside bar. But on a fateful summer week, Usnavi’s dreams collide with those of his friends and family, forcing them all to re-examine what truly matters to them. Miranda and playwright Quiara Alegría Hudes serve as writer-producers on the film, with Miranda having a cameo role in a cast that includes Anthony Ramos, Corey Hawkins, Leslie Grace, Melissa Barrera, Olga Merediz, Daphne Rubin-Vega, Gregory Diaz IV, and Jimmy Smits.

Also opening this weekend is “Peter Rabbit 2: The Runaway,” which might provide theaters with a chance to bring in families for the first time since the release of “Raya and the Last Dragon.” While the DreamWorks animated film “Spirit Untamed” had a decent $6.2 million opening last weekend, it was a film specifically targeted at families with younger girls. 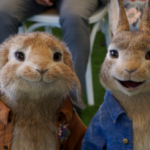 This means that the “Peter Rabbit” sequel will have a chance to gain a wider swath of the family audience, though its numbers could be weighed down if “In The Heights” truly lives up to its four-quadrant potential. Because of this, projections for the film sit in the mid-to-high teens, lower than the $25 million opening posted by the first “Peter Rabbit” in February 2018. Sony’s projections are lower at $8-10 million.

“Peter Rabbit 2” sees the titular Beatrix Potter hero (voiced by James Corden), run away with his fellow rabbits after he fears that the children’s books created by his human friends Thomas and Bea (Domhnall Gleeson and Rose Byrne) will paint his mischievous antics in a villainous light. Will Gluck returns as writer-director with a cast that also includes David Oyelowo, Margot Robbie, and Elizabeth Debicki. The film has grossed $45.8 million from nine overseas markets so far and has a Rotten Tomatoes score of 71%.

For a deeper look at “In The Heights” and how it could mirror the box office path of recent movie musicals, check out our analysis on WrapPRO.