Needless to say, $200 million movies shot across six countries with thousands of digital effects are not usually set, to borrow a phrase from director Christopher Nolan ("The Dark Knight), "in the architecture of the mind."

But "Inception," due out July 16, "has a real chance of being one of the top five films of the summer," Jeff Bock, a box office analyst with Exhibitor Relations, told TheWrap.

"Following one of the biggest hits Hollywood has ever seen, Christopher Nolan has a gold ticket to do whatever he wants."

Bock admits that in a more crowded summer, such as 2011, which will see the final installment of the Harry Potter franchise and Marvel’s "Captain America" and "Thor," Warner’s gamble might not pay off. But this season, he says, viewers might be hungry for more challenging fare. 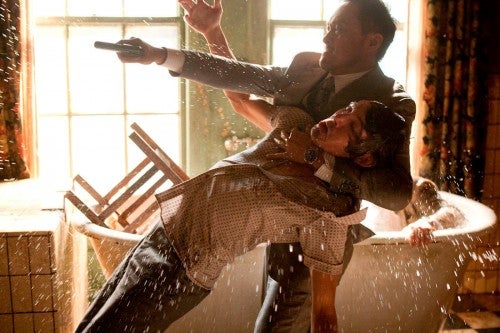 Warner Bros. declined to comment on its marketing strategy for this article.

"’Inception’ stands a very good chance of winning everything," said Drew McWeeny, film editor at Hitfix. "Nobody likes being spoken down to, and there’s this steady drip of awful movies from a culture of plagiarism and rehash, so when we reach ‘Inception,’ it will feel like an incredible oasis."

Still, there aren’t a whole lot of blockbusters that have asked audiences to bring their brains. The "Matrix" trilogy may have managed to ride allusions to French theorist Jean Baudrillard to a $1.5 billion worldwide box office gross, but other high-concept movies such as "Artificial Intelligence: AI" and "Public Enemies" have found the summer season less hospitable.

As a hedge, the studio has been heavily touting its two big trump cards — director Nolan and star Leonardo DiCaprio — in print and television ads.

Familiarizing audiences with the movie’s tightly guarded plot without revealing any of the film’s twists is a more difficult proposition.

"It’s a tough movie to market, because on the one hand it’s full of surprises, and the audiences are savvy these days, because everything can be found out on the Internet," Mike Sampson, editor-in-chief of the film blog JoBlo, told TheWrap. "But you also need to inform more mainstream audiences what the movie is about, so they don’t just see Leo and crumbling buildings."

So far, he said, "They’ve done a good job, but we’re entering the home stretch and they’ll need to let us know a lot more really soon."

All that audiences know thus far is that the film centers on a group of thieves who engage in corporate espionage by stealing ideas from people’s dreams. Most fans expect a third-act reveal, which the studio is keeping under wraps.

The director, seen last week haunting the Warner lot with a do-not-distract me look in his eye, is still completing final touches to the film. It will be shown for the first time to a handful of media this week, as the studio begins rolling out a massive marketing campaign in earnest.

Thus far, the trailers have trafficked heavily in money shots. In place of plot synopsis, the teasers lean on stunning visuals — cities fold on top of themselves, men fly across hallways, water crashes through the walls of a Japanese-style mansion — while maintaining a sense of mystery.

Cleverly, Warners has primarily recycled the same shots in each new trailer.

"They’re reusing the same footage," Steve Weintraub, editor-in-chief of the film fan site Collider, told TheWrap. "A train comes down a city street and there is a beach image, but it’s a two-hour movie, and we’ve seen a maximum of 3.5 minutes. There’s no doubt there’s an awful lot of stuff that is still being held close to the vest." 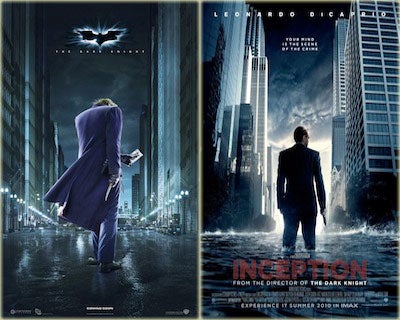 Credit director Nolan, McWeeny says. Nolan, who has been intimately involved in "Inception’s" roll-out, has a polar opposite view from other directing giants such as Robert Zemeckis.

Zemeckis has famously said that audiences like to know everything about a movie before they step into a theater. Nolan disagrees — and he’s putting his (or rather Warner Bros.’) money where his mouth is.

"He does not tip his hand," McWeeny said, citing the filmmaker’s refusal to show shots of Two-Face prior to "The Dark Knight’s" release. "This is a multilayered game, and we’ve been given just enough to prime our interest, but how this whole world ties together? We’re walking in cold."

Film bloggers say that audience goodwill from "The Dark Knight" may be enough to bring viewers into theaters in droves, even if they’re not certain what exactly they’re going to see. It’s no surprise that the teaser poster, featuring DiCaprio staring toward a bleak and impersonal cityscape, strongly resembles "The Dark Knight" character posters with Batman and the Joker (see above). 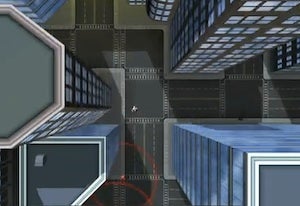 An online game, called "Mind Crime," has served as a venue for the studio to debut trailers, behind-the-scenes footage and posters from the films. It’s also helped reveal tidbits of the mysterious plot. The game, which has been revealed in several stages, has players working as dream extractors, navigating a futuristic world filled with parks and skyscrapers, all while attempting to avoid detection by menacing baddies with guns.

However, some bloggers complain that "Inception’s" online promotions have dealt too much with explication and haven’t given viewers enough Easter eggs to justify the time spent.

"Some viral campaigns really worked separate from the movie as entertainment, but this isn’t one of them," Sampson said. "The ones that work better tend to be based on an existing property such as ‘Tron’ or ‘The Dark Knight.’"

Further, some, such as Alex Billington at FirstShowing.net, have griped that the posters and their taglines "Protect Your Thoughts" and "Mind Crime Is Real" are infuriatingly vague.

It may not matter. While the viral campaigns are intended to stoke mostly fanboy enthusiasm, beyond the fanboy bubble, Warner’s campaign seems to be resonating. Film bloggers say that anecdotally they’re hearing "Inception" and "Toy Story 3" are the films readers are most excited about.

John Singh, a spokesman for the online tracking site Flixster, says the film’s buzz among males mirrors that of "Avatar," although that film had much stronger interest levels among females. To counter this, it seems likely that Warner Bros. will begin touting the movie’s female leads, Ellen Page and Marion Cotillard, more prominently in trailers and posters.

Indeed, box office analysts say Warners should aim for something in the $50 million to $70 million range on opening weekend, not that far removed from "Avatar."

Of course, all the anticipation in the world won’t be worth anything if Nolan’s dreamscape fails to deliver. If "Inception" is going to be a hit, it will be dependent on word of mouth.

"This isn’t a movie that’s going to make 60 percent of its gross on the opening weekend — it’s going to be about that second week drop-off," Bock said.