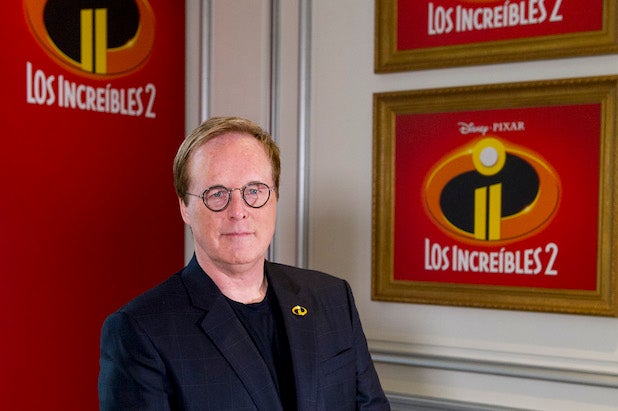 In the 14 years between the release of the first “Incredibles” movie and its sequel, which was nominated for a Golden Globe for Best Animated Feature Thursday morning, director Brad Bird worried that by the time this new movie came out, audiences might’ve grown tired of superheroes.

“Spider-Man” and “X-Men” were the only active superhero movie franchises in 2004 when “The Incredibles” came out, but since then the genre has of course exploded. In fact, “Incredibles 2” wasn’t even the only animated superhero movie nominated for a Golden Globe this year, sharing that honor with “Spider-Man: Into the Spider-Verse.”

To avoid getting lost in the shuffle, Bird says he pitched “Incredibles 2” to Pixar with focus on the film’s gender role switch in order to set it apart from the pack.

“We had a lot more elbow room, and I was worried that on this film audiences would be sick of superheroes, because it’s wall-to-wall superheroes now,” Bird told TheWrap following the film’s Golden Globe nomination. “But I worried for about 10 seconds, because this film has never really been about superheroes. It’s about a family that happened to be superheroes.

“The fact that every other superhero franchise out there is based on pre-existing material, and here we have something that was an idea that I came up with to be a movie. It didn’t have any other life outside of being a movie … that we’re still around and have been able to flourish when there are so superhero movies that have been well known for a long time is really amazing and wonderful,” he added.

The superhero genre explosion wasn’t the only thing Bird had to worry about do while making “Incredibles 2.” The director told us that not long after the sequel received the green light from Pixar, they lost a year from their schedule to accommodate “Toy Story 4” moving to 2019.

As a result, Bird said he was “flummoxed” by the sequel’s villain. The concept shifted significantly to what’s seen in the final film where the Incredibles fight The Screenslaver, a supervillain who hypnotizes others via a TV or phone screen. He said the original idea involved the family battling a form of AI, which Bird says he still hopes to develop in the future.

“I was in this mode of ‘holy moley!’ If the story isn’t serving the family characters, I had to jettison it quick. I couldn’t sit there and noodle it,” Bird said. “Because the finish date was coming at me like a freight train. So that story line kept shifting.”

What didn’t change though was the core story, which Bird said dated back to the first film. He knew the sequel would involve a gender role switch, with Elastigirl taking the lead over Mr. Incredible, and he knew it had to deal with the “un-exploded bomb” of Jack-Jack, who audiences were aware had powers after the first film but the family did not.

So when asked if he expected a nomination for “Incredibles 2,” Bird said that the honor is the cherry on top of a long time coming of trying to make the film.

“It’s all extra,” Bird said. “The most important thing is to make movies, and make work that you’re happy with and proud to be associated with. And if you get to make more, that’s really, really, really great. And anything after that is just dessert. You don’t anticipate dessert, but you hope that it will be served.”