Twenty years is quite a long wait for a second coming (curiously, “Trainspotting” is another 1996 hit currently shooting its sequel), but the two-decade anniversary provides impetus enough to necessitate a reboot for a new generation. Indeed, Emmerich and his original co-creator Dean Devlin, spend much of the new film’s opening minutes setting up new characters and filling us in on their relationship to the old ones who themselves are, sometimes literally, re-awoken for the new battle.

Just as Bill Pullman‘s President Whitmore set a tone for movie presidents to come, here we open with a female leader in the White House, Sela Ward’s President Landford, clearly a hint from Hollywood at where they think the race is going, just as many believe Morgan Freeman playing the commander-in-chief on screen paved the way for Obama in real life.

The other strikingly political/commercial giant step taken in this sequel is the inclusion of major Chinese characters, such as the beautiful Angelababy, who plays fighter pilot , whose uncle General Lao (Chin Han) is a moonbase commander. There are passages of Chinese dialogue and Chinese moon products in the base’s canteen. 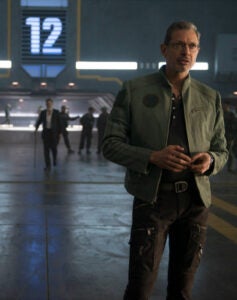 So yes, there’s an awful lot of plot and backstory floating around like space junk here, none of which really matters when the new invasion begins. Essentially, it’s the same as the first movie, but bigger and, depending upon where you see it, now in 3D.

While Bill Pullman, Jeff Goldblum and Judd Hirsch return, and Brent Spiner’s Dr Brackish comes out of a coma, Will Smith is noticeably absent, his character Steven Hiller mentioned as a hero, but a dead one. His place — if not his charisma nor box office clout — is filled by Hiller’s son Dylan (Jessie T. Usher, “When Stands Tall”), an elite pilot who’s a friend of President Whitmore’s daughter Patricia (Maika Monroe, “It Follows”), a former flying ace who gave up her career to care for her aging father. Meanwhile she’s now in love with maverick space pilot Jake (Liam Hemsworth), who’s up manning space tugs on the moon.

Setting all this new info up is a very complicated, not to say rather dull, task but Emmerich has become a master at such multi-character mashups. and he manages to cram it all in smoothly enough to then test the strength of these sketchy characters and our emotional investment in them while blowing the world to bits.

Emmerich’s campy, gleeful global destruction is ramped up, even if it couldn’t really go much further. The new alien mothership is so vast — “three and a half thousand miles across,” exclaims someone looking up at a virtual sky — that we can’t see the whole thing on the screen, which somewhat deflates its visual impact.

This dark vessel exerts such a gravitational pull that whole cities are sucked up and dumped down as it passes; thus, when London gets its now customary wipeout, the London Eye is crushed by half of Kuala Lumpur falling on it, before Dubai’s skyscraper spears Tower Bridge. As Goldblum’s David Levinson has time to observe: “They like to take out the landmarks.”

In truth, the movie could have done with more of this humor. Goldblum is the only character with any sense of irony, and his character gets a bit sidetracked having to deal with his eccentric father Julius (Judd Hirsch), who turns up at the climax to distract the giant alien with a rather silly schoolbus loaded with kids.

Goldblum does get a bit of an upscale romantic storyline, too, a relationship with an increasingly familiar type of character in such Hollywood mayhem, usually played a classy French actress. It was Juliette Binoche in “Godzilla,” Julie Delpy in “Avengers: Age of Ultron,” and now Charlotte Gainsbourg contributes her strangely posh yet slightly halting English delivery to the role of a psychiatrist specializing in victims of alien trauma. It’s not quite Denise Richards as a nuclear physicist Bond girl, but it is nevertheless odd casting.

Meanwhile, at the end of the world, the carnage on screen is such that Emmerich feels the need to restate what’s happening every five minutes, with little graphics or incidental salty sea dog characters stuck on a ship monitoring alien activity: “We’ve shot down her defense shield, dismantled her weapons and she’s going for the molten core — you’ve got four minutes, General.”

These silly cutaways are always my favorite moments in movies like this: The shepherds in an Arabian desert tent, or the African villagers crowded round the sort of short-wave radio everyone seems to have handy for just such apocalyptic occasions. (Brush off the cobwebs, twiddle a knob, give it a whack and boom, you’re patched into the President’s private line.)

While it would be foolish to say “Independence Day: Resurgence” lacks scale and spectacle in this age of the blue-screen blockbuster, scene after scene of the stuff becomes repetitive and soulless due to its victimless violence. It feels like no one ever really dies or gets hurt, despite the destruction of half the planet.

Again, the only joke is left to Goldblum, who looks up at the new enemy ship and delivers the deadpan line: “That’s definitely bigger than the last one.” Bigger, yes, but not nearly as much fun.

"Independence Day 2" producer Dean Devlin shared the first photo of cast member Jeff Goldblum on the set of the Twentieth Century Fox sequel to the 1996 blockbuster about aliens invading the planet, and humanity rallying to fight back. "Hanging with David Levinson (Jeff Goldblum) 20 years later is a dream come true! #IndependenceDay," Devlin captioned the Instagram photo with the actor. Goldblum is reprising his role as computer genius David Levinson, who fans may remember for being responsible for saving the world alongside Will Smith. Sadly, Smith will not be back for more action, butÂ Bill Pullman, Vivica A. Fox, and Judd Hirsch will be.