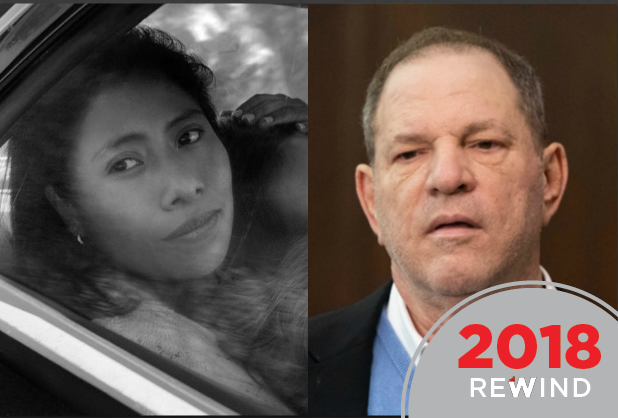 The indie box office in 2018 was already going to be one of big changes: For the first time in over two decades, Harvey Weinstein was MIA from the industry after the collapse (and bankruptcy sale) of The Weinstein Company and his indictment on sexual assault charges.

In his place are a handful of studio-backed indie divisions and a mix of ascendant and struggling newcomers trying to gain a foothold in the art-house market with potential awards contenders. Oh, and there’s Netflix and Amazon Studios both trying to break into the Oscar race in major categories.

Up to this point, Netflix’s presence at the Oscars was mostly in the documentary section, winning Academy Awards for the feature doc “Icarus” and the short doc “The White Helmets.” Otherwise, its film division was known in 2017 more for panned films like “Death Note” and “Bright” than for “Okja,” the acclaimed film that got the company banned from the Cannes Film Festival.

But in 2018, Netflix has struck back with two films that are making many best-of-2018 critics’ lists: the Coens’ “The Ballad of Buster Scruggs” and Alfonso Cuaron’s “Roma,” the latter of which received a limited theatrical run to earn Oscar eligibility. While Netflix hasn’t disclosed how much money “Roma” made at the box office or how many people have streamed the film, success at the Oscars could open the door to the studio working with other big-name directors.

The company has already signed first-look deals with “Harry Potter” director Chris Columbus and “War for the Planet of the Apes” director Matt Reeves, as well as a multi-picture deal with Paramount.

Amazon Studios, on the other hand, may be pulling up stakes from the art-house theatrical market and pivoting toward blockbusters after finding only mixed success as a solo distributor of 2018 films like the Steve Carell-Timothée Chalamet drama “Beautiful Boy,” which earned $7.5 million, and the critically panned “Life Itself,” which grossed just $4.1 million as the studio’s only wide release. (The company had previously scored by co-releasing art-house hits like “The Big Sick” with Lionsgate and “Manchester by the Sea” with Roadside Attractions.)

Amazon also underwent a large overhaul as former NBC Entertainment head Jen Salke replaced Roy Price, who resigned amid sexual harassment accusations. Among her many new hires was Julie Rapaport, who is set to lead a new film division focused on bigger-budgeted and more commercial hits.

Megan Ellison’s Annapurna Pictures also had a turbulent year as it transitioned from production into distribution in the last year and a half with mixed success. The key will be the performance of two December releases, and Adam McKay’s “Vice” and Barry Jenkins’ “If Beale Street Could Talk,” which have garnered some major awards attention. (“Vice” has earned $17.7 million in its first week, while “Beale Street” has pulled in nearly $2 million in limited release.)

Both arrive after a tumultuous fall in which the studio dropped two high-profile projects, ousted film president Chelsea Barnard and had a box office misfire with Joaquin Phoenix-John C. Reilly Western “The Sisters Brothers.” The one big bright spot for Annapurna looking ahead is that it will co-distribute the next James Bond film with MGM, though the release was pushed back to February 2020.

If Annapurna can turn things around, it could find itself trending on the path set by A24, which seems to have supplanted The Weinstein Company as the top indie company.

Though its presence at the Oscars might be smaller this year compared to the last couple of years, A24 still set a studio box office record with the acclaimed horror film “Hereditary,” passing “Lady Bird” with $79.3 million grossed worldwide. The New York-based company also had solid success with Bo Burnham’s “Eighth Grade,” which posted one of the top per-screen averages of the year and earned $13.5 million from a 1,000-screen release.

Also Read: Raven Capital to Acquire Open Road for $87.5 Million After No Other Bidders Emerge in Bankruptcy Auction

On the other hand, one big cautionary tale this year was Open Road, which joined TWC in the bankruptcy pile this year just two years after producing the Best Picture winner “Spotlight.” Several flops led to Open Road merging with IM Global to become Global Road Entertainment, but the studio declared bankruptcy in September and this month was sold to Raven Capital for $87.5 million.

Meanwhile, other relative newcomers continued to stake their claim on the market. Neon made its debut in the Oscar race last year with “I, Tonya,” which earned $30 million.

Roadside Attractions earned its highest grossing film ever with the faith-based hit “I Can Only Imagine,” which earned $83 million.

Also Read: Disney Dominates, Superhero Movies Get Respect and 5 More Lessons From the Film Industry in 2018

STX Entertainment saw a 25 percent increase in domestic grosses thanks to mid-budget releases like Amy Schumer’s “I Feel Pretty” — but none of its films topped $50 million domestically. And even some of its strongest performers lost money: The Mark Wahlberg action film “Mile 22” grossed just $36 million on a $50 million production budget, while Melissa McCarthy’s “Happytime Murders” earned only half its $40 million budget, not counting marketing costs.

The company, which saw the sudden exit of president Sophie Watts at the start of the year, also scuttled fall plans for a Hong Kong IPO due in part to the changing U.S.-China economic climate.

Also Read: Disney Dominates, Superhero Movies Get Respect and 5 More Lessons From the Film Industry in 2018

The indie wings of major studios did well in 2018. Universal’s Focus Features saw a 35 percent rebound from a weak 2017 thanks to limited-release hits like Spike Lee’s “BlacKkKlansman” and the Mr. Rogers documentary “Won’t You Be My Neighbor,” while Sony Pictures Classics saw a 32 percent bump thanks in large part to the Oscar success of “Call Me By Your Name.”

But perhaps the biggest question mark hangs over Fox Searchlight, which is in a state of uncertainty given Disney’s pending acquisition of Fox’s film and TV assets. Searchlight proved to be a hit-maker this year thanks to Best Picture winner “The Shape of Water” ($195 million worldwide) and fellow Oscar winner “Three Billboards Outside Ebbing, Missouri ($159 million worldwide). The studio continued the success through 2018 with Wes Anderson’s “Isle of Dogs” ($64 million worldwide) and Yorgos Lanthimos’ “The Favourite” ($15 million and counting).

That success has led rival distributors to believe that Searchlight will be able to operate the roughly the same way under Disney, though it remains to be seen how exactly Bob Iger will integrate the first indie studio the company has owned since selling Miramax in 2005.

For the indie studios that remain, 2019 should bring more bidding wars for indie films, attempts by Netflix to further move into the theatrical market, and limited releases of awards contenders that will try to stand out in an increasingly crowded movie market.

“If you’re in charge of the campaign for a potential Oscar contender, you’re really going to have to look hard at this calendar and figure out how you’re going to put it out there against such tough competition,” Exhibitor Relations analyst Jeff Bock said. “And this also means that you’re probably going to see fewer Christmas Day prestige releases just because they’ll need to campaign to Academy voters.”

But Focus Features distribution chief Lisa Bunnell keeps an optimistic look both at the changing calendar and at the future for non-major studios as a whole. New competitors, including Netflix, will provide more opportunities for filmmakers to get their work out to the largest audience possible. And she’s confident there’s enough good movies to go around for everyone.

“The key for the future is to stay diverse in your slate,” she said. “Documentaries did well this year, and we had some, but you can’t just do documentaries. We had films from black and female filmmakers and that appealed to different audiences. The indie market is big enough for all of us to do that.”