Most awards contenders, let’s face it, were in pretty much the same shape after the Independent Spirit Awards nominations were announced as they were beforehand.

Film Independent, the organization that presents the awards and assembles its nominating committees, did its usual mix ‘n’ match job between studio-financed “indie” films released by specialty divisions like Fox Searchlight, Sony Classics and Focus Features, and a handful of truly smaller films that will likely be overwhelmed when it comes time to hand out the awards.

“Precious” and “The Last Station” got the most nominations, and the first of those will likely win the most awards.

But who really came out ahead, who slipped and who held their own? A few thoughts:

“The Last Station.” It wasn’t necessarily expected to pick up five nominations, including picture and director, so its strength came as a slight surprise. Also, it’s the kind of film that will already appeal to the older, more conservative side of the Academy; the Spirit Awards nods may give it a boost with the younger voters who might not otherwise consider it.  Plus, putting Christopher Plummer in the Best Supporting Male category helps remind voters that this is the Oscar category where Sony Classics wants him.

“Food, Inc.” It’s not a surprise that it won a Best Documentary nomination when other high-profile docs didn’t (sorry again, Michael Moore), but the accumulation of nominations and awards for Robert Kenner’s film is making it look like a real threat to “The Cove” in the Oscar doc sweepstakes. 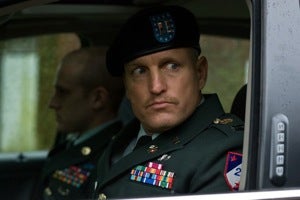 Oscilloscope. A small company that quietly picked up four nominations for “The Messenger” (right) and two for “Treeless Mountain,” tying it with Focus Features and Lionsgate in second place according to the Spirit Awards official count. But the director of the Oscilloscope film “The Exploding Girl” also got nominated for one of three grant awards; if you throw that in, which Film Independent doesn’t, Oscilloscope’s seven nods tie them with Fox Searchlight and Sony Pictures Classics for the most nominations. Either way, it’s an impressive showing for the company.

“(500) Days of Summer.” A Best Feature nod (over “A Serious Man”) definitely gives it a boost. An Oscar best picture slot is still a real longshot, but original screenplay is looking better.

“The Messenger.” Easy to miss amidst more ballyhooed military movies like “The Hurt Locker” and “Brothers,” Oren Moverman’s terrific drama made a pretty good case that voters ought to pick up those screeners.

“Precious.” It needed to be one of the big nominees to maintain its frontrunner status, and it did. Now it needs to win.

“Paranormal Activity.” Definitely not the kind of movie the Spirit Awards usually honor. (In fact, it’s the one nominee that prompted a gasp or two in the room when it was announced.) But in some ways it’s as cheap and indie as they come – and if it’s a game-changer at the multi-plex, why not here, too?

“Two Lovers,” “Amreeka,” “Sin Nombre”… Indie Spirit love is fine, and deserved, and unlikely to translate much beyond these particular awards. Although especially for the last of those films, you never know ….

If anybody should understand a little misfortune, it’s this film:

“A Serious Man.” Two nominations, for cinematography and directing, are okay. Not landing on the Best Feature list is not. The Robert Altman Award helps make up for that, to a degree … but the burden is now on the critics to remind Oscar voters that this is one of the year’s best movies.

Sorry, maybe not this year:

Hal Holbrook. You’d think that he’d be a natural for the Best Male Lead category for “That Evening Sun.” Instead, the veteran actor was shut out while two supporting actors from that film, Ray McKinnon and Mia Wasikowska, got nominations.

Whoever associated with “The Hurt Locker” submitted it last year. In 2008, it was a little movie with no release date; two Spirit Awards acting nominations that gave it a little boost. If its submission had been held until 2009, it would likely have been one of the top nominees in multiple categories, and the momentum would have been a big help in its Oscar campaign.