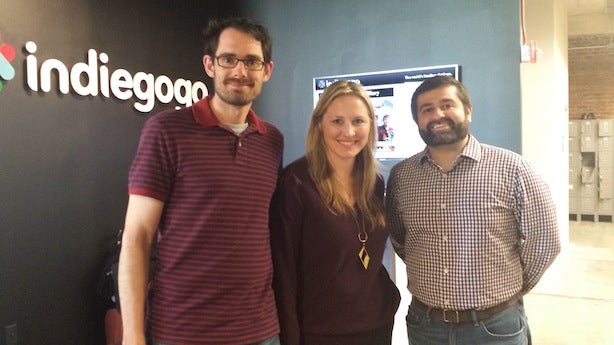 Crowdfunding continues its rise in influence. Indiegogo has just announced an injection of $40 million of new capital into expanding its reach, which includes an aggressive push into international markets and improving the product experience for users.

TheWrap stopped by Indiegogo’s offices on Mission Street in San Francisco a few hours after the announcement Tuesday. The staff had just broken from leadership training meetings, (those who weren’t playing ping-pong) and prepared for Kleiner Perkins investor John Doerr to stop by.

TheWrap: Congratulations on the raise. So this money is going mainly to international expansion?
Ringelmann: International expansion, product, payments and trust innovation. Education and mobile. How to get better at crowdfunding, best practices. A whole ecosystem has developed in and around us, which is great.

Every country, every person who wants an idea to come to life, we can provide more on-the-ground experience and education. It’s going to help us build trust, trust being fundamental to the role we play.

Well, if the company is 85 people now, how big can it get?
We’re doing millions in funding a week. I think we’re at 7-8,0000 live campaigns right now. So we haven’t put a date or a number on that $40 million, but there’s definitely a lot of thought that’s gone into growing internationally.

There are all kinds of people raising money for all kinds of things. We have everything from young first-time filmmakers who want to raise $2,000 for their film and want a simple little campaign, to hardware designers who are super-seasoned who have venture backing but are still using Indiegogo for market testing. Their needs are much more.

How many countries are you expanding to?
We’re currently in every country, there’s access to us in every country. But there are things we can do to make the service more customized for local markets. In the first five years we invested a lot in back end, a scaleable infrastructure, a global payment system. We were architected in such a way so it would be seamless for the user actually executing that on the back end is complicated. Right now campaigns can choose the currency they want to raise money in. We offer five currencies.

And how big can the company get from a revenue perspective?
Our goal is to become the world’s funding engine. So we almost don’t even know how big the market is. It’s like how big is the commerce industry? It’s so enormous we don’t really know how big it can get.

Where do you stand on equity crowdfunding?
We’re still very much leaning in on it. Still very much supporting it. The rules have been proposed, we’re providing guidance. We want to help regulators think it through and get it as right as they can. They have a hard job because they’re trying to regulate an industry that doesn’t yet exist.

Will it be this year?
Hard to say. I think the regulators are being cautious.

Are you worried now that you have $40 million the company will change, the dynamic among the three founders will change?
What I?m excited about with investors we’ve brought on is they share our long term vision an open and democratic platform making finance efficient and fair. When I met John Doerr and Jules (Maltz) from IVP, both were very clear on how important Indiegogo was to exist, for the world. They really believe the future of finance is one where everyone has equal opportunity to participate in the system. So we’re not a world of haves and have nots.

So you?re not worried?.
John Doerr is coming over today to give our whole leadership team OKRs, Operating Key Results, it’s a metric-based system around how to keep your team focused. He brought it to Google when he invested in Larry (Page) and Sergei (Brin), and it’s used to keep everyone on the same page. To your point, I remember when we first raised $250,000 in a convertible note and it was a lot of money, then we did $1.5 million, then we did $15 (million). In a way it’s the same growth challenges, but it’s just a few more zeroes. I definitely like we’ve grown up. I feel like I’m growing up.

Where does Indiegogo stand compared to Kickstarter right now?
We’re the largest platform . They are more focused on the creative. We’re bigger globally in terms of number of campaigns.

Well hi, congratulations. How does it feel to have raised all this money?
It feels hugely stressful. (Laughs) Wait, that shouldn?t be a quote?  It feels great, We launched six years ago, and we stuck to our vision beyond all reason and logic.

So back to Kickstarter. If I call them they will agree that you?re the largest crowdfunding site?
Why don?t you line up a debate between them and me, anytime you want?

Really?
Definitely. Anytime you want me and them on a stage I?m available. I?m as direct as they get.