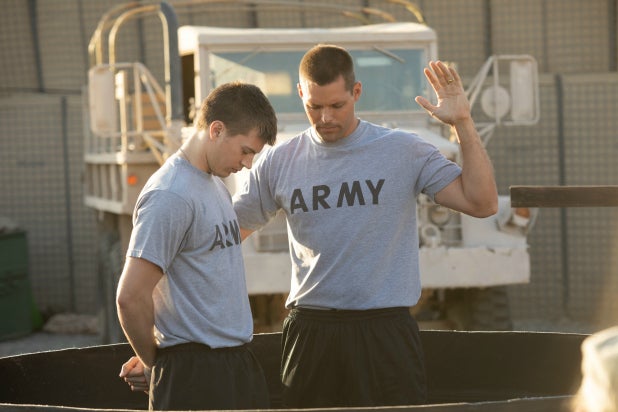 Films about war aren’t always subtle. Neither are films about faith. But some movies find a way to tackle these enormous issues without resorting to simplistic messages, and thank goodness “Indivisible” is one of them.

Directed by David G. Evans (“The Grace Card”), “Indivisible” tells the story of real-life U.S. Army Chaplain Darren Turner (Justin Bruening, “Grey’s Anatomy”) and his wife Heather (Sarah Drew, “Grey’s Anatomy”). Together, and separately, they endure the mental, physical and spiritual stresses that come from Darren’s tour of duty in 2007, as he offered support for the soldiers around him but struggled with his own self-care.

Not everyone is looking for emotional support, of course. Some soldiers are just trying to keep their heads down, do their job and not think about the horrors they experience every day. But if they aren’t looking for an earnest heart-to-heart about life’s big questions, Darren can at least remind them to call their spouses more often and to make videos for their kids. As one gruff soldier asks, “Is messing with other people’s lives part of your job description?”

Darren, who doesn’t seem to have ever thought about it that way before, replies, “I mean… kinda.”

While Darren endures the hardships of war, for himself and for everyone else around him, Sarah takes it upon herself to assist the other families of soldiers in the midst of their strife. She tends to the grieving widows while fearing, all the while, that she’ll be next. She organizes thousands of Christmas care packages. And when Sarah has a panic attack because she’s raising three kids on her own and their daughter just wound up in the emergency room, her husband is unavailable. Even when she gets him on the phone to talk about how hard and scary her life is, Darren can barely comprehend her experience, because he just got out of a terrifying firefight and doesn’t feel like he’s allowed to express his own anxieties.

It’s that sort of moment that sets “Indivisible” apart from many similar films about war. It’s not a film about the politics or the missions; it’s a film about how difficult it is to hold onto one’s sanity, faith and family in extreme circumstances. Although the film has a few battle sequences, it portrays soldiers as sensitive men and women with complex feelings who depend on each other for emotional support as they ponder the philosophical ramifications of death.

That’s a tall order for any movie, and “Indivisible” mostly rises to the challenge. That’s not to say that the dialogue is always poetic and illuminating, but perhaps it shouldn’t be. “Indivisible” is not a film about people who have already come to lasting conclusions about their religion, their profession and what lies in the great beyond. Many of them are young and have never seriously considered these topics before.

Lance Bradley (Tanner Stine, “Impulse”) doesn’t seem to believe in God, for example, but he does believe in free stuff. So he’s always in Darren’s tent, scarfing snacks and swiping reading material. He keeps asking for Bible verses that might explain the horrors he experiences every day, and Darren doesn’t have them. But they have each other; they have honest and open discourse about their fears and existential crises. The modest understandings they come to, about each other and their place in the grand firmament, are honest, if not always eloquent.

Of course, the film is about people who believe in God, and the movie supports them. It’s such a realistic portrayal of faith for so long that a centerpiece sequence in which Darren’s kids feel a sudden compulsion to pray for his safety, right when he’s nearly killed in an explosion, seems arch and out of place. But audiences can take the scene literally if they want to, and figuratively if they choose; the point is to keep the people we love in our hearts when they are far away and enduring hardship. That’s a positive message no matter what you believe in.

Darren’s tour lasts 15 months, and “Indivisible” takes him all the way home. Just when you think the story is about to overstay its welcome, the other shoe drops: Darren just spent more than a year of his life tending to the emotional needs of others, and nobody tended to his. He’s traumatized and alienated, and he’s afraid to share his experiences with his family for fear of scarring them too.

Because “Indivisible” isn’t a film about suspense or momentum, the plot can’t come to a satisfying conclusion, only the characters can. So we really do have to stick with them long after any other movie would have ended. Darren and Heather seek outside help for their communication problems, and Darren engages in self-care through household projects and a new, less stressful occupation. “Indivisible” might be the only war movie with a montage of characters healthfully discussing their problems and building a backyard jungle gym for their kids.

And let’s be honest, we probably need a film like this. “Indivisible” isn’t narrowly focused; it’s specifically targeted at people who struggle to balance difficult lives and mental health. It espouses meaningful communication between family members and clearly illustrates some of the consequences (although it shies away from some of the more disturbing extremes). It doesn’t treat religion like a cure-all, and it doesn’t turn to God for easy answers. And in the end, it understands that mental and spiritual wellness is an ongoing process that needs to be demonstrated, respected and explored.

Audiences looking for quality stories about faith and patriotism will find “Indivisible” to be a thoughtful and satisfying motion picture. Although it never reaches the emotional and cinematic zeniths that might make it great, it does what it sets out to do, by offering hope and guidance to audience members who need it. And that’s kinda great in itself.