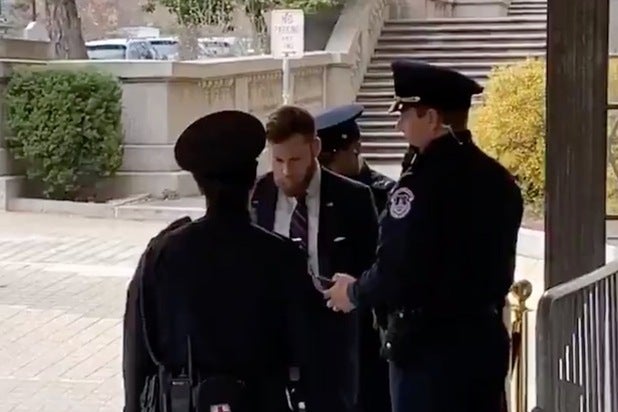 Infowars correspondent Owen Shroyer livestreamed himself interrupting, then being removed from, a House Judiciary Committee hearing in impeachment inquiry into President Trump on Monday.

In a video posted to his Twitter, Shroyer is shown being handcuffed as he tells the camera, “I’m being arrested right now for disrupting the Congress. I’m a criminal for my First Amendment rights.”

According to Infowars, Shroyer “won’t be released until end of day at earliest.”

He continued, “We voted for Donald Trump,” accusing Democrats of attempting to impeach the president because they don’t “like” him, before declaring, “Trump is innocent.”

Notably, Shroyer’s videos on Twitter did not link back to Infowars itself. In 2018, Twitter, joining a list of Silicon Valley stalwarts, permanently suspended digital conspiracy theorist Alex Jones and his Infowars website for violating its policies against “abusive behavior.”

In a recap posted to the Infowars site, Kit Daniels wrote, “The arrest highlights a double standard in Washington, D.C., in which establishment-approved activists are allowed to confront congressmen in their faces, but a reporter like Shroyer is arrested for protesting a House representative from a distance.”

A representative for Nadler did not immediately respond to a request for comment.