A version of this story about Issa Rae first appeared in the “Race Begins” issue of TheWrap’s Emmy magazine. It is one in a series of conversations about the effects of the coronavirus on the TV industry.

Alongside its continued focus on Issa’s (Issa Rae) complicated relationships, even more complicated friendships, and her dreams of making a career out of bettering her community, the fourth season of HBO’s “Insecure” has featured a running side story about LaToya Thompson, a fictional missing 26-year-old black woman who is at the center of a true-crime TV series that everyone in-universe has been watching all season long.

Though LaToya is not real, “Looking for LaToya” — “Insecure’s” show-within-a-show — explores her mysterious disappearance with a touch of “dark humor” that Rae said is based on the media’s coverage of actual instances of black women who have gone missing.

“We were just all individually obsessed with various true-crime podcasts in the writers’ room,” Rae, the star and co-creator of the comedy, told TheWrap. “I know that I had been listening to ‘Monster: The Zodiac Killer’ and ‘To Live and Die in L.A.’ And then some other people had. And I think the conversation was just about, these are always about missing white girls and what would it look like if there were a podcast centered around trying to find a black girl? Because people don’t necessarily care when black girls go missing. There have been documentaries about how people don’t care. I think about the Craigslist Killer who killed like 100 black women before anybody cared. And so that was the dark humor that went into ‘Looking for LaToya.'”

You can watch HBO’s promo for “Looking for LaToya” here.

TheWrap spoke with Rae last month around the midpoint for the fourth season of “Insecure,” which wrapped production before the pandemic. Now Rae and her fellow “Insecure” writers are working on Season 5 without knowing how and when those scripts will be shot.

Read more from our interview below.

How was “Insecure” affected by the pandemic?
We were still mixing the final episodes of Season 4, but thankfully our amazing sound team, our post-sound team, was able to get it together and was able to mix from home. So we just narrowly missed the crisis.
We started our writers’ room for Season 5 virtually last week, which is so strange. And it’s actually been great talking about Season 5. This is the first time in the history of our show that we’ve been in the room at the same time the show is airing, so that is a strange dynamic. It feels like we’re getting live reactions to Season 4, and we always try to not keep the audience in mind at all when writing the show. So we kind of have to go into the mindset of, “OK, did y’all see the feedback about last night’s episode? OK, cool, now back to tunnel vision.”

It’s way more efficient, I’ll say, in a way that I hate. Because we get in there right at 9 and we’re just down to business, whereas in the room we’d be like, “How was your weekend? What did you do yesterday? What are you eating? What is this YouTube video?” There’s more room for distractions, but here we are making the best use of our time, which is, I guess, great.

Also Read: 'Insecure' Creator Issa Rae Asks 'What the F- Is This' After Trump Likes Tweet About Her Show 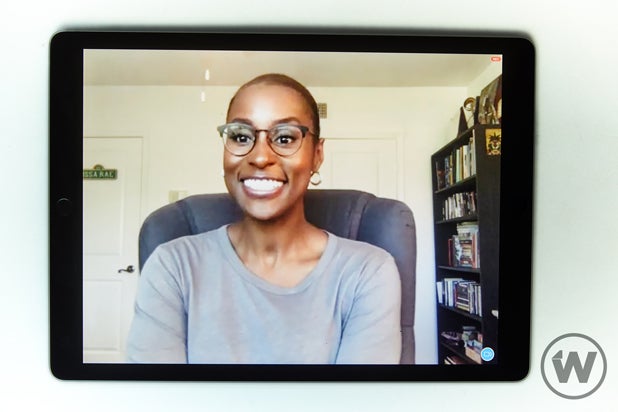 What do you see as TV’s role in this time of isolation?
TV is such a crutch, it’s such a place of comfort. I’m turning to television shows on my off time — or movies or documentaries, specifically — just so I can forget about what’s happening in the world around me. And it’s dope to hear that people look at our show as a way of escape. It’s sad to me that with the block party episode we just aired, we were highlighting some of my favorite restaurants and some of the black businesses that are in that specific neighborhood in Los Angeles, and some of them may not survive this. And that’s really heartbreaking, to think that post-this, some of these businesses might not be here. So I think with a show like ours, if you live in L.A., it can feel like, “Does this hurt? Is this a fantasy? Will we ever be able to go out again?”

What do you think it will be like when you can start production? Are there conversations about when you’ll be able to begin filming Season 5?
Definitely, but they don’t feel any more comforting or reassuring that it’s going to happen soon. I have faith and I think, obviously, economically we need to figure it out, especially since L.A. is so dependent on that entire industry. So yes, conversations have been had. But it changes day to day. Even today, hearing that we have another three months of this lockdown comes as a surprise, but not really. I think we’re just used to hearing bad news at this point.

Season 4 of “Insecure” hsa explored an uncomfortable, tense period in Issa’s relationship with her best friend Molly (played by Yvonne Orji) that we haven’t seen them go through before. Why did you decide to take them to this place now?
Unfortunately, a lot of female friendships reach that point. And for me, I’ve reached that point with a couple of friends and it hurts. I always say I’ve never had my heart broken by a man, but I’ve had my heart broken by some of my female friendships because that is just a completely different dynamic. In so many different ways, your girlfriends are like your family and it might feel like losing a piece of you, losing a piece of your happiness. And for Issa and Molly, we’ve had them build to this point. They’ve always been friends, but there have been little things that have gone unchecked over the last couple of seasons, and the end of Season 3 really set off kind of the downward spiral of their friendship.