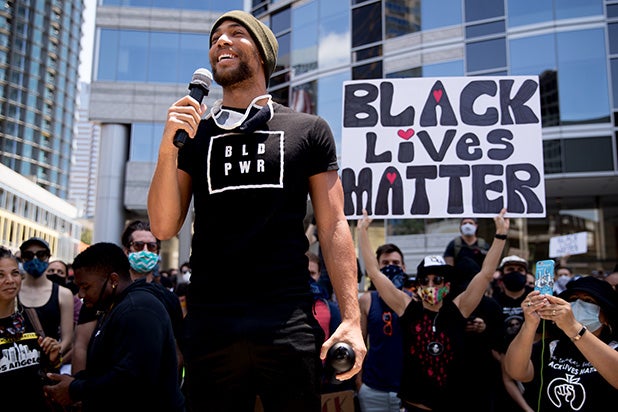 More than 300 Black performers and executives have signed an open letter calling on Hollywood to cut ties with police and invest more heavily in Black artists and stories.

“The lack of a true commitment to inclusion and institutional support has only reinforced Hollywood’s legacy of white supremacy,” the letter reads. “This is not only in storytelling. It is cultural and systemic in Hollywood.”

According to Variety, which first published the full text, the letter was penned by “Insecure” Kendrick Sampson in collaboration with Thompson and Black Lives Matter co-founders Patrisse Cullors and Melina Abdullah. The letter was also posted on the website for BLD PWR, the advocacy group founded by Sampson.

“Because Hollywood has been a huge part of the problem, we demand it be a part of the solution,” the letter reads. “We, as Black people, bring immense, immeasurable cultural and economic value to the industry. We are also suffering from the oppression perpetuated by this industry. We have every right to demand this change.”

The letter goes on to list a series of demands of the industry, which include a commitment to bar police from sets and events including as security, to appoint more Black executives to leadership roles and invest in anti-racist content, and to implement union rules that “expand their accountability of workplace safety to include racism, sexism, homophobia, transphobia, bi-phobia and other related biases and attacks” though “anti-racism task forces with substantial power to hold studios and production companies accountable.”

Read the full text of the letter here.