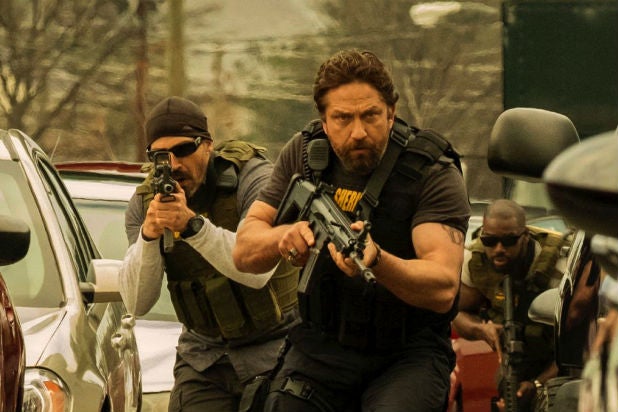 Gerard Butler’s latest film “Den of Thieves” is another in a series of genre pieces that have become the actor’s stock-in-trade: gritty, crowd-pleasing thrillers.

It’s directed by Christian Gudegast, a screenwriter on a similar Butler project “London Has Fallen,” part of a franchise of films about U.S. Secret Service tough guy Mike Bannon who is always in the habit of saving the president and his many men and women.

While “Den of Thieves” might seem like another piece of content in this high-octane Butler machine, it’s actually been in development for 14 years. It follows a special unit of the LA County Sheriff’s Department and their complicated connection to a bank robbery crew on a hot streak.

The long and curious life of the action film was revealed to TheWrap by Gudegast and veteran film producer Tucker Tooley during a recent interview.

It’s a story peppered with tubs of cash, secret tours of the federal reserve and lengthy preparation in the real-life trenches of L.A.’s underbelly. Here are some of the things we learned:

“The first words I wrote were 14 years ago in 2003. A writing partner and I had a blind deal at New Line Cinema,” Gudegast told TheWrap.

“This one morning, I opened the Los Angeles Times and saw this photograph of a money tub at the Federal Reserve Bank and the said, “Can you imagine, in this plexiglass box, there is $30 million dollars?” Gudegast said.

It was a glass cube full of $100 stacks, and the movie spilled forth from there.

“My dad actually was involved in developing the building that the federal reserve was in. He was a member of the federal reserve board in San Francisco so I arranged a tour for us. We couldn’t take any pictures so we had to take it all to memory,” Tooley recalled.

Cops and robbers can face off anywhere, so why the City of Angels?

“L.A. is the bank robbery capital of the world, hands down, it always has been,” Gudegast said.

“There are an average of 2400 banks in L.A. robbed per year, the next closest is Sao Paolo which is about 800. There are several reasons for that. The other major reasons is because we have so many freeways, interchanges and exit routes.” he added. TheWrap could not immediately verify the figure.

Also Read: Netflix Comes Out in Support for Net Neutrality, Tells FCC 'We Will See You in Court'

Turns out being a tough guy, or deeply entrenched and knowledgable about the landscape, pays.

“We had several technical advisors,” Gudegast said, “like Bill Rehder who wrote a book called  ‘Where The Money Is’ about bank robbery in L.A.”

There was also an undercover cop, a Los Angeles sheriff and individuals Gudegast was familiar with involved in crime in South Central Los Angeles, South Los Angeles and the South Bay are.

“The  attention to detail was extreme, because these are big f—-g tough dudes,” he said.

STX Films will release “Den of Thieves” in theaters this Friday, after its long development and a brief setup at the defunct Relativity Media.  But platform releases are increasingly popular for genre fare similar to this.

“I think you can make an argument both ways — 11 million people saw Netflix’s ‘Bright’ in its first week. Ultimately what you want as a filmmaker and producer is to reach an audience,” Tooley concluded.

“That said, I can’t imagine watching this movie and having the same reaction on TV as a theater. It was shot to be seen in the theater. It’s an experience,” he said.