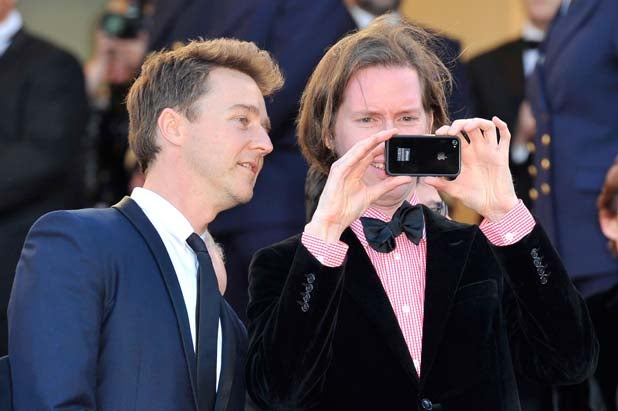 For new arrivals, hitting France no-so-fresh from a sleepless trans-atlantic flights from Los Angeles to the Cote d'Azur airport in Nice is always rough. (Ever since I heard the story of a prominent talent agent being carried off the plane still down for the count after taking too many Ambien, I've eschewed sleeping pills.) That's one reason why so many festivalgoers stop in London or Paris en route to the granddaddy of film festivals, which is celebrating its sixty-fifth anniversary in 2012.

This year, I'm sharing a tiny fifth-floor two-bedroom walk-up in Cannes with three Indiewire staffers; there are only two sets of keys, so we stow one in a flowerpot on the unlit landing. Luckily, my iPhone has a flashlight and the apartment location is ideal, just blocks from the wide palm-lined beachfront walkway in Cannes, Boulevard de la Croisette, and about halfway between two major meeting nexuses: the Grand Hotel, with its vast green lawn with white sofas and terrace cafe, and the poolside bar at the Majestic Hotel, where the festival officials and jurors stay. Harvey Weinstein stays there too, although for a period he moved out to the famed cash-only Hotel du Cap down the Riviera coast in Cap d'Antibes, where the stars and moguls hang, motoring to and from Cannes by boat. (My favorite Hotel du Cap story: a bored Charlie Sheen throwing ashtrays off the balcony onto the rocks below.) For decades, most of the major studios, including Sony, Universal, and Fox, have locked in suites at the billboard-festooned blue and white Carlton Hotel, which also reserves a tiny single for the critic of the New York Times.

The Europeans and indies tend to congregate at the Grand Hotel, where I used to stay in the nineties when Bingham Ray bequeathed me his tiny studio apartment in the Residences. It was right out of a Pedro Almodovar movie, complete with olive and orange decor, shag rug, and tropical plastic toilet seat. After long hours of meetings and screenings, industry folks, often in formal wear, drift in from their evening doings to the Grand bar and terrace for drinks and info sharing. "Your BlackBerry is archaic," IMDb Col Needham told me sternly one year as I complained about data access in France. As soon as I got back to L.A., I upgraded to an iPhone.

Whether you get an engraved invite in your cassier to one of the nightly black-tie festival dinners, cough up the bucks for Harvey Weinstein's star-studded annual amfAR Cinema Against AIDS benefit, or score access to Paul Allen's yacht or Graydon Carter's Vanity Fair party, there's glamour to spare. I'll never forget the night at Cannes in 1993 that I arrived at the bottom of the Palais red carpet right behind Sylvester Stallone, star of Renny Harlin's "Cliffhanger," as he climbed the stairs to meet another star at the top, one who stood in flowing white, clutching her little dog Snowy to her ample bosom: Elizabeth Taylor.

Alongside the festival's black-tie glamour and critical prestige is the world's most robust film market, with global acquisitions executives from TV and film flocking to screenings of both finished films and rough footage. The studios use Cannes as a massive marketing opportunity to launch their pictures in the all-important global market, which has outstripped North America and now represents more than 50 percent of the film industry's annual grosses. Much of the decline in quality of American pictures can be laid at the door of the studios' push to please foreign markets with big explosions and simple formula plots.

Every day the Cannes media get invites to cover press conferences and PR stunts, from Jerry Seinfeld jumping off the the roof of the Carlton in a bee costume (the 2007 animated "Bee Movie") to lifting aloft with giant colored balloons the house from Pixar's "Up" to bare-bottomed Sacha Baron Cohen posing in a green thong before "Borat" was a household word.

Buyers, sellers, and press are wined and dined at nightly dinners, with talent on hand. In 1991, the Weinsteins brought Madonna to Cannes for "Truth or Dare" and threw an afternoon yacht cocktail party; all the guests boarding the yacht had to remove their shoes -- except for Madonna. At the red-carpet gala, Chicago critic Roger Ebert and I watched from an apartment terrace across from the Palais as Madonna climbed the steps and whipped open her dress coat to reveal a Jean Paul Gaultier cone bra, a photo op that went around the world. At the gala after party, Time critic Richard Corliss went down on his knees to talk to the star. Multiple beach parties line the Croisette every night, and in the wee hours, more than one woman has removed her high heels and walked home on bare feet.

Each morning -- no matter how late you got in the night before -- the media make a dash up the red-carpet stairs of the bunkerlike Palais, to grab a red seat for the 8:30 a.m. press screening of that night's competition film at the Grand Theatre Lumiere, which films up early for anticipated titles. The seats are so plush that it's easy to snooze through the pokier films. Movies like Jane Campion's "The Piano" or Lars von Trier's "Dancer in the Dark" yield a theater full of tough critics moved to tears. And at the screening's end, what every filmmaker fears is the dreaded boos or, worse, the flapping of the seats in displeasure.

On the morning of the first press screening of the 2012 Cannes Official Selection, I follow the director Wes Anderson and his entourage as they ascend the escalator to embark on the obligatory gauntlet of Cannes photo call, TV interview, and conference de presse. Making a big in the ramp-up to the Oscars, Universal's specialty arm Focus Features is giving Anderson ("Fantastic Mr. Fox") the Cannes treatment. Focus booked his latest -- and, according to many critics, best -- film, "Moonrise Kingdom," as the festival's opening night world premiere for several reasons: One, Anderson, forty-three, is a Cannes virgin. There's nothing like a rousing walk up the Palais red carpet, flashbulbs exploding, to feed a filmmaker's hungry ego. (And building your foreign profile improves box office around the world.)

Focus chief James Schamus, an erudite Columbia film professor who wears bow ties and moonlights as Ang Lee's producer-screenwriter, tells me he opted to follow the Sony Pictures Classics playbook for Woody Allen's "Midnight in Paris," which opened in Europe right after its Cannes debut in May 2011 and went on to win Allen his fourth Oscar. But more important, the movie was Allen's career-highlight domestic grosser ($56.8 million) and the most successful indie title of the year.

Anderson's seven movies are utterly identifiable as his, from his 1996 debut with Texas pal Owen Wilson, "Bottle Rocket," and its follow-up, "Rushmore," to 2007's "The Darjeeling Limited." Sometimes his arch artificiality is winning ("The Royal Tenenbaums"), other times, irritating ("The Life Aquatics With Steve Zissou"). In the case of his latest film, it works.

Every frame of "Moonrise Kingdom" is arranged to perfection; the dialogue is deliciously flat; the sixties period references are selected with humor and affection.  This remote island family comedy, which was filmed in 16 millimeter on Conanicut Island in Narragansett Bay, Rhode Island, is packed with eager Khaki Scouts and anxious, bumbling, disappointed, and well-meaning adults. But at its heart is a budding romance between two twelve-year-old loners (Gilman and Hayward). Their powerful feelings ignite strong reactions in everyone around them as a storm rises and lightning literally strikes them twice.

Also read: Cannes at the Halfway Point: Where's the Excitement?

After the early morning press screening, many of us rush to the press room with its free wifi, cafe espresso, and flat-screen live stream of the photo call followed by translated Canal Plus TV interviews and the official press conferences. Anderson and his cast bask in the rapturous critical reception. The actors describe participating in a delightful family summer camp adventure; Anderson led them much the way Norton's character leads the scout troop. As a sign of the times, the movie is one of the few in the festival shot on film. Anderson admits that it may he his last, as labs like Technicolor move to digital services and stop processing celluloid film prints.

"Maybe there's a great app that makes it look like film," he says, "but to my mind there is no substitute."

"The whole movie is on the shoulders of these kids," the brown-corduroy-suited Anderson tells me during our beachside interview, squinting in the sun as the blue Mediterranean laps behind him on the Gray d'Albion beach.

"I love artifice and very emotional movies like 'The Life and Death of Colonel Blimp' ... I'm not actually au courant." "Moonrise Kingdom," he says, is "the re-creation of a fantasy when I was a twelve-year-old."

As someone with vaunted auteur status, Anderson is able to score a coveted Cannes competition slot.

BIO Anne Thompson
Anne Thompson, founder and editor-in-chief of the daily film blog Thompson On Hollywood and editor-at-large of Indiewire, has covered the Hollywood beat for more than 25 years, for The Hollywood Reporter, where she wrote the weekly syndicated column "Risky Business" and launched THR's first blog, Riskybiz, Premiere, Film Comment, L.A. Weekly, and The Los Angeles Times Syndicate. Also, she has contributed to Vanity Fair, Wired, Filmmaker,New York Magazine, New York Times, More, The Washington Post, The London Observer, and was the West Coast Editor for Premiere's Los Angeles bureau. Thompson has also taught Film Criticism at USC, hosts Sneak Previews at UCLA Extension and moderates and participates on many industry panels and does media interviews, especially at Oscar time, for such networks as MSNBC, ABC, CBS and CNN. among others. Born and raised in Manhattan, she now lives in Los Angeles. Anne answers questions about "The $11 Billion Year" here. It can be purchased here. 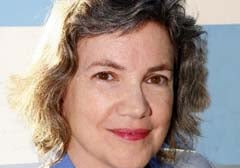 Anne Thompson, founder and editor-in-chief of the daily film blog Thompson On Hollywood and editor-at-large of Indiewire, has covered the Hollywood beat for more than 25 years, for The Hollywood Reporter, where she wrote the weekly syndicated column "Risky Business" and launched THR's first blog, Riskybiz, Premiere, Film Comment, L.A. Weekly, and The Los Angeles Times Syndicate. Also, she has contributed to Vanity Fair, Wired, Filmmaker,New York Magazine, New York Times, More, The Washington Post, The London Observer, and was the West Coast Editor for Premiere's Los Angeles bureau. Thompson has also taught Film Criticism at USC, hosts Sneak Previews at UCLA Extension and moderates and participates on many industry panels and does media interviews, especially at Oscar time, for such networks as MSNBC, ABC, CBS and CNN. among others. Born and raised in Manhattan, she now lives in Los Angeles. Anne answers questions about "The $11 Billion Year" here. It can be purchased here.
x
Looks like you're enjoying reading