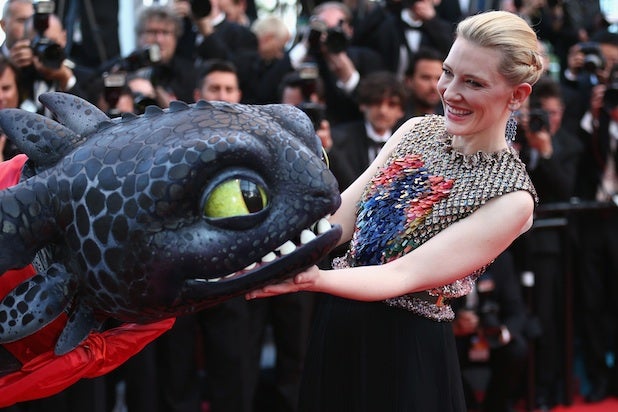 A little after midnight on Saturday night, the iconic strains of Ennio Morricone’s theme to “The Good, the Bad and the Ugly” wafted down the Croisette as an outdoor beach screening of the Sergio Leone Western came to an end. Tuxedo-clad guests at the Cannes Film Festival heard the music as they left the Grand Theater Lumiere after a screening of the raucous “Wild Tales,” along with others who’d exited the nearby Salle Debussy after seeing “The Disappearance of Eleanor Rigby.”

And, of course, they were all wading through a sea of humanity that was just in town to party.

As the competition for Cannes’ top prize, the Palme d’Or, hits the halfway point, it’s tempting to say that that moment – “The Good, the Bad and the Ugly” providing the theme music for a late night at the world’s most prestigious film festival – was an apt way to sum up what we’ve seen so far.

There’s been bad, a label most viewers would place on Atom Egoyan’s “Captives” and Olivier Dahan’s opening night film, “Grace of Monaco.”

And there’s been lots of ugliness on display onscreen, with child abduction and abuse (“Captives”), incest (“That Lovely Girl,” “Maps to the Stars”) and brutal violence sometimes played straight (“Timbuktu”), sometimes played for laughs (“Wild Tales”) and sometimes played both ways at once (“The Homesman”).

The overall sense from talking to this year’s Cannes-goers, though, is that for all the goodness, badness and ugliness at the festival, the whole thing has been a bit … blah. Nothing has galvanized the festival the way “Blue Is the Warmest Color” did last year, or “Amour” and “Holy Motors” the year before, or “The Tree of Life” and “Drive” before that.

Nine of the 18 main-competition films had screened through the end of the weekend (though David Cronenberg’s “Maps to the Stars” was only at a press screening), and the race for the Palme is completely unsettled.

Mike Leigh‘s “Mr. Turner,” the first film to win near-unanimous raves, might be the safe choice. “Winter Sleep” is a strong contender, but the glacially paced, three-hour-plus Turkish drama is so slow and talky that it’d be the most adventurous (and no doubt lowest-grossing) winner in years. “Timbuktu” seems a likelier candidate for the Grand Jury or directing awards, as does “The Homesman.” “Maps to the Stars” is a hoot, but it’s also pretty pulpy. “Wild Tales” is a hoot some of the time, but really pulpy. “Saint Laurent” is stylish but divisive, “Captives” has been widely dismissed, and the word on “La Meraviglie” – the only screened competition film I haven’t seen yet – is that it might be a little lightweight.

At a 10th anniversary yacht party for Participant Media on Sunday night, actor Gael Garcia Bernal showed up and said he’d come straight from a meeting of Jane Campion’s jury, of which he is a member. “Whew,” he said, shaking his head. “Intense.”

(Naturally, he didn’t elaborate beyond that – jurors are sworn to secrecy until the Palme is handed out on Saturday night.)

The feeling on the Croisette is that while Cannes 2014 has been far from terrible, it hasn’t been particularly eventful, either. It’s indicative of the year that one of the liveliest reactions came from the out-of-competition premiere of DreamWorks Animation’s “How To Train Your Dragon 2” (premiere photo at top), certainly among the least Cannes-like of the festival’s bookings.

As usual, many of the biggest attention-getting events have been on behalf of movies that are not part of the festival at all. Two of the biggest hotels on the Croisette, the Majestic and the Carlton, are emblazoned with ads for “The Hunger Games” and “The Expendables 3,” respectively, while the cast of the former turned heads and the cast of the latter snarled traffic by showing up in a tank.

And on the deal side, the major bidding wars that seem a part of most festivals don’t seem to be taking place very often. Most of the main competition films came to the festival with distribution in place with only two announcing deals during the fest. One was “Captives,” which A24 announced during a screening that left most viewers wondering why they bought it; the other was “Wild Tales,” which Sony Classics had actually negotiated well before the festival.

As for the hundreds of other deals that have been announced over the last five days – well, it’d be instructive to check back in a couple of years and see how many of the films that were presented with great fanfare have actually been made.

So as Cannes hits the halfway point, we’ve got ourselves a Peggy Lee song: Is that all there is?

That may be an unfair dismissal of a festival that has showcased a considerable amount of first-rate work – in addition to the films already mentioned, we could throw in “Red Army” and “It Follows” and “The Blue Room” and “Run” and several others that have been warmly received. But the festival could use the kind of jolt that’s not supplied by Sylvester Stallone rumbling down the Croisette in a tank, or J-Law meeting Biebs at the Vanity Fair party.