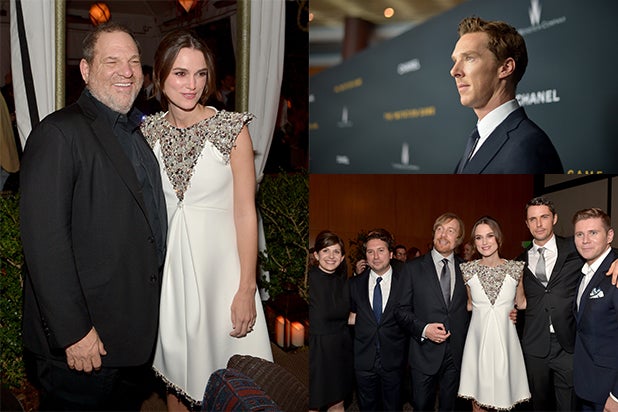 With Mark Wahlberg at the Dolby Theatre telling stories of making Leonardo Dicaprio wait on him for 8 hours years ago while “The Imitation Game” and Weinstein clan celebrated at the Chateau, Monday night reminded everyone that we are closer to actual awards season “playoffs” than we are to the NFL playoffs.

More on the AFI Fest festivities in this link, but first, Benedict Cumberbatch.

“Ben,” as composer Alexandre Desplat calls him, was first to arrive at the DGA for the Weinstein Company’s cocktail party, screening for “The Imitation Game,” one of the two misunderstood British genius period pieces in the awards hunt this year.

In “Imitation Game,” Cumberbatch’s portrayal of coding founding father Alan Turing work in cracking the German enigma codebox in World War II may be the reason that I’m here able to write about Hollywood party coverage 70 years later. Besides being a key to winning the last world war, it’s also proved a winner on voters and audiences that matter.

“From BAFTA to Academy members, so far the reception has been totally brilliant”, Keira Knightley told me before the screening.

Cumberbatch and Keira Knightley had just flown in from hanging with some modern geniuses at the “Breakthrough Prize” on Sunday night.

Also read: Keira Knightley Hung Out With Facebook, Google Founders But Didn’t Know Who They Were (Video)

Hosted by Seth MacFarlane, tech billionaires like Mark Zuckerberg and Jack Ma had given prizes for technological innovation the night before up in Silicon Valley and screened the film itself with Google co-founder Sergey Brin at Yuri Milner’s house.

After Monday’s layover at the DGA, Benedict had to bolt to fly back to England before the festivities hit high gear.

After the screening, that parade of cars heading west down Sunset led to a full takeover of the Chateau Marmont.

Harvey Weinstein had one corner table on the patio, while Bob Weinstein had the kitty-cornered table on the other corner. “The Kings Speech’s” Oscar winning writer Davied Seidler (himself a Brit) would move in to the table later in the night.

Michelle Rodriguez and Edward Norton (declining the official house photog) were amongst the faces mixing amongst the Moscow mules, chocolate chip cookies, and floating trays of prosciutto in the library and the patio. Zen Freeman, popular Brit DJ with the Union Jack on his laptop, spun in the library. The UK delegation was complete.

Nearby, Bruce Vilanch (in a visual pun t-shirt touting the 2nd Amendment with a cartoon illustration of a man with hairy grizzly arms) peppered the babyface “Imitation Game” writer Graham Moore with questions about the origins of John Lennon-referencing lines, while commending him that the dialogue “smacks of authenticity.”

Designer Demitri Sourakis, “The Vow” and upcoming “All Summer Long” director Michael Sucsy, “The Butler” and “The Paperboy” producer Hilary Shor, Tom Cocquerel held down a fun wing of the party on Monday night. (Mikey Glazer)

Vilanch would also hold court spitballing knowledge on British Aristocrats who entered the Army in the 1940s and the Australia’s opposition party leaders.

Get this guy on your Jeopardy team.

All guests got a $120 bottle of Chanel (Coco Mademoiselle) on the way out from the evening’s host, with Chanel actually getting topline billing on the night. The luxury touch showed throughout.

Nicholas Pike, “Keep on Keepin On” director Al Hicks, and Leah Sydney at the Chateau.

Dodge Black Friday malls. Go see “The Imitation Game” yourself on the day after Thanksgiving. No Chateau Marmont after party included in the box.