Kathryn Bigelow looked around the International Ballroom of the Beverly Hilton on Monday afternoon, and laughed. “Welcome to my room,” said the “Hurt Locker” director with a grin.

Bigelow was joking, but the ballroom had been good to her over the past couple of days: on Saturday night she was there to watch her film win the Art Directors Guild Award for a contemporary film, and on Sunday she was back to see the American Cinema Editors give the film its top award as well.

Monday, though, was a non-competitive event, the annual Academy Awards Nominees Luncheon. “This is very civilized, isn’t it?” said Best Actress nominee Carey Mulligan (“An Education”) as she gazed around the room, which was curtained-down to accommodate fewer than 500 guests, about 120 of them nominees. “The red carpet is nice and short, and the room feels much smaller than it did when the Golden Globes were here.”

Mulligan was one of the 14 acting nominees who attended the collegial event, dubbed “Oscar’s ultimate nominees’ mixer” by Academy president Tom Sherak in his opening remarks.

It was a mixer in more ways than one: nominees were spread out around the room so that no one sat with anybody from their film or their category. The seating arrangement, joked Best Original Song nominee Maury Yeston (“Nine”), was probably a good thing. “I come from the theater,” he said, “where the people you worked with are probably the last people you’d want to sit with.” 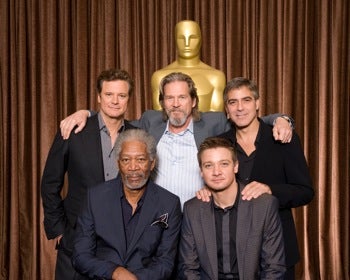 All five of the Best Actor nominees attended (left), plus four of the five Best Actress contenders (minus only Helen Mirren).

After stopping by the press room (Brent Lang has that report here), nominees mingled before lunch, some in the thick of it (Sandra Bullock, surrounded by other Disney nominees) and some taking it all in from the outskirts of the room.

“There are so many of events,” said a weary Best Actress nominee Gabourey Sidibe, who’d been in the room the night before for the editors’ awards. “But I can make it though. I’m holding up.”

One advantage of all the networking of awards season, said the “Precious” star, is that she’s getting the business side of her Hollywood career in order. “I have an agency now,” she said. “I didn’t have that when I made this movie. I didn’t have head shots.”

She laughed. “I still don’t have a [demo] reel, but they tell me that I don’t need one.” (Her next project, she said, is a series for Showtime.)

For other nominees, the experience was even more surreal. “This does not feel real to me,” said Juanita Wilson, an Irish filmmaker whose Russian-language short film, “The Door,” was nominated for Best Live-Action Short. “I keep thinking I’ll wake up and be back home.”

Lunch brought the traditional class photo, in which all the nominees gathered on a riser to pose for a group shot. Afterwards, Academy executive administrator Ric Robertson called out the nominees one-by-one – but he did so in reverse alphabetical order, which meant that it was short documentarian Jon Alpert, rather than composer Hans Zimmer, who had to wait while every other nominee received a certificate of nomination and an official Oscar nominee sweatshirt. 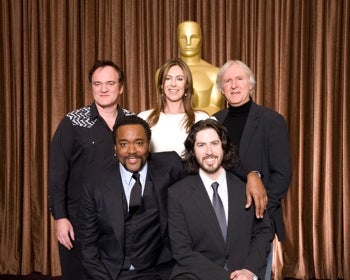 Afterwards, producers Adam Shankman and Bill Mechanic addressed the nominees for the traditional “please keep your speeches short” plea. Their pitch centered on the Thank-You Cam, an innovation of producer Laura Ziskin that has been used for the past several Oscar shows: after leaving the stage, winners can speak for as long as they want, and thank as many people as they’d like, in remarks that are uploaded to the Oscars website.

Mechanic called long, list-laden thank-you speeches “the single most hated thing about the show,” and encouraged winners to save their lists for the Thank-You Cam, while focusing on “sharing your passion for what your work means to you” for the onstage remarks.

They also gave a taste of the footage that will be edited into a show-opening film, which included Diablo Cody, Renee Zellweger and Davis Guggenheim talking about what the Oscar meant to them.

“We are dedicated,” Shankman told the nominees, “to giving you one hell of a kick-ass, fun night.”

Before, during and after lunch, mutual admiration societies sprung up around the room. The maker of a live-action short pitched an idea to Jeremy Renner; the wife of Daniel Ellsberg (subject of one of the nominated documentaries) congratulated “Hurt Locker” screenwriter Mark Boal on his film; Maggie Gyllenhaal had a long conversation with Academy governor Richard Pearce and his wife, longtime family friends; "Coraline" director Henry Selick was greeted by a sound editor who’d worked with him on "James and the Giant Peach" 15 years earlier;  and, long after most people had gone home, Quentin Tarantino huddled with Jeff Bridges and Woody Harrelson.

Meanwhile, a steady stream of nominees had their pictures taken with the five big Oscar statues onstage, and another statue that stood at the centerpiece of the “class photo.” “Everybody is doing the picture thing,” laughed “Up” composer Michael Giacchino – who then admitted that yes, he’d done it too.

As the event wound down, a figure in orange robes made his way through the thinning crowd, heading for the stage. It was one of the monks depicted in the documentary “Burma VJ,” which details how that country’s monks led an heroic stand against their country’s military repression.

When the got to the foot of the stage, the monk reached into his robes, pulled out a small camera, and began taking photos of Oscar.