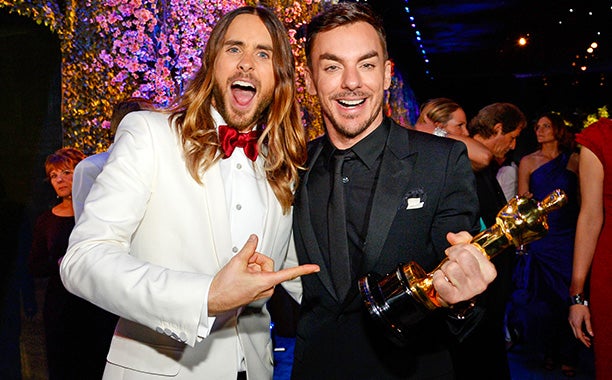 In the dim of the Governors Ball, the Oscar winners fairly glow with their statues and their unadulterated delight.

There’s a whole mess of heavy golden men on a small table on a riser, now the property of the team that made “Frozen,” including directors Jennifer Lee and Chris Buck. The movie’s theme song, “Let It Go,” also won the Oscar for Best Song.

Disney CEO Bob Iger, normally the buttoned-down executive, is grinning from ear to ear, taking a moment to hold all the Oscars for a photo opp (yes he posed for TheWrap). The win marks a personal triumph, he allows.

It is the first ever for Walt Disney Animation Studios in the 13-year-old feature-animation category.

“One of my goals was to return Disney animation to its rightful place,” Iger says, standing near Lee and Buck. “And buying Pixar was as much about that as buying Pixar. Everyone said it was only Pixar, but it was animation too. And I think this night – it just feels good. It is a great moment. “

Even some of the losers are glowing with excitement. David O. Russell, whose “American Hustle” was nominated for 10 Oscars, manages to embrace all the good karma in the room.

Which he should. The guy has been nominated two years in a row. “Actually it’s been five nominations,” he corrects a well-wisher good-naturedly. He means five in three years, between “American Hustle” (writing and directing), “Silver Linings Playbook” (writing and directing) and “The Fighter” (directing). Not bad for a guy stuck in the Hollywood wilderness for seven years.

And that’s not counting the Best Picture noms. He’ll be back at this party, most certainly, and undoubtedly with his pick of actors. Still he says, “the Brits gave me a statue.” Apparently they get him.

Cate Blanchett, elegant and ethereal in her elaborate flesh-colored gown, can barely walk a step without someone stopping to congratulate her. She won high marks from everyone for an eloquent acceptance speech that gracefully recognized every one of her fellow nominees, while not forgetting her director, Woody Allen. In a stroke, the whole ugly controversy from Allen’s personal life seemed forgotten.

Spike Jonze holds his Oscar down by his side, as if a little embarrassed by the notoriety. “I don’t think you can consider yourself a rebel outside the system anymore,” I observe. “But please don’t feel compelled to direct an ‘Iron Man 3’ or a new ‘Thor.'”

“I won’t,” he promised and ducks off to find his friends.

After three and a half hours captive in the Dolby theater, the guests inside the Governors Ball spread out, reach for a drink and an Oscar-shaped smoked salmon as they handicap the experience. The host gets the once-over: While Ellen DeGeneres was likeable as Ellen always is, goes the chatter, her delivery was pretty casual for the Oscars. Too much extemporaneous chatting in the aisles, not to mention the pizza initiative.

“That could have gone way wrong,” shares one Academy member who declines to be named. Ellen’s edgiest joke was the first of the evening – the one about everybody being a racist if they don’t vote “12 Years a Slave” the winner. Uncomfortable laughter all around.

The publicists of the season circle the room, exhausted beyond description and exuding relief that the process, once again, is over.

Disappointment can hardly be missed on the faces of nominees like Leonardo DiCaprio. He lost the Best Actor race, again, this year to Matthew McConaughey, which just about anyone would have figured, but still it stings.

He circles the ballroom impatiently with his posse saying, “Where’s my mom?” – his date for the evening. Leo will have other chances.

Talk of the room is why John Travolta had so much trouble saying “Idina Menzel.” (He said something that sounded like Adele Dazeem. Several people noting that the actor had a single line to learn, which he succeeded in mangling.)

Dr. Salah Amer, father of Karim Amer, the producer of the nominated documentary “The Square,” watches all the stars and the hoopla in something like a daze. ‘I live in Miami, but my wife came in Miami, but we’re very happy and excited for our son. ” Egypt is “very unstable. We all pray to get a president and move forward. (The film) was very risky – their lives were really at risk. But they did an excellent job and came to Hollywood.”

At Hollywood black tie affairs, bathrooms are excellent places to meet people (also: valet lines).  “Captain Phillips” producer Dana Brunetti lingers as he waits for his girlfriend Kristin Chenoweth to emerge. She finally does, tiny in a gorgeous, body-hugging gown. We all agree, meantime, that the show was too long and way too boring. How to cut it?

The show had moments of inspiration, notably the musical numbers as with the joyous “Happy” dancing and when Pink sang “Over the Rainbow” on a backdrop of images from “The Wizard of Oz.” But, as always, there were far too many awards in categories the public doesn’t know or care about.

I ask Mark Johnson, a leading member of the Academy and head of the Foreign Language committee. He doesn’t have a solution right of the cuff.  The branch governors won’t give ground, is the general view.

So we will suffer on, unless boredom shows up in the ratings.

Barkhad “I’m the Captain Now” Abdi wander the Governors Ball unattended. His new agent, he says, is finding opportunities for him. His days of limousine driving behind him, he will move to Los Angeles permanently next month, with an acting friend.

But Sony, which distributed his film, has a major contingent in the center of the room, which includes Sony’s CEO Kazuo Hirai. Perhaps he’s making an appearance to put down rumors that he might sell the entertainment division.

We run into Kim Novak on the dessert line and remark on how nice it was to see her on the telecast, and that we were glad she made a personal remark. “Should I not have done that?” she asks, still insecure about changing her script.

Not at all. It’s the Oscars, and the least we can hope for is a moment of real emotion.